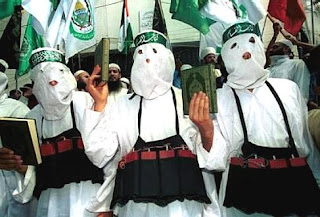 Couldn’t be more plain. The radicalization of the “Palestinian Authority” equals that of the Hamas. The military wing of Fattah, Aksa Martyrs Brigades, wants their party to dump any pretense of “moderation”, fire the PA’s prime minister and join ranks with the violent and very genocidal Hamas.
ust what does the West expect Israel to do in the face of such unreasonable elements, …more compromise? Every attempt at appeasing the ranks of the intolerant radicals only serves to wet their appetite for more intolerant demands.
“We renew our call to President Abbas to fire Salaam Fayad and form a new government that would not abandon the armed struggle,” the group said in a leaflet distributed in Ramallah. It also called on Abbas to stop all contacts with Israel, including security coordination.”
The only way forward … is to take a lot of steps backward, with a renewed call for any additional western aid to be conditional upon any advances in the realm of civil/human rights within the Palestinian Authority. That should be also accompanied with the West’s high expectation for the ending of incitement of Jews and Israel within the Palestinians media, mosques and schools.
It has to be said, that there is no way forward presently to the end of the conflict, when one side intends, in very clear language to continue the fighting. What is there left to talk about, and why should the West encourage such behaviour by funding the very same bodies of government that promote violence? It’s time to take another approach, a more stern approach, to those who offer more blood as a solution to their “grievances, than one of reconciliation and hopes for peace.
The Palestinians have not moved anywhere near the thought of eventually living side by side with the Jewish state, and we shouldn’t be holding to the myth that they are. More here. *L* KGS