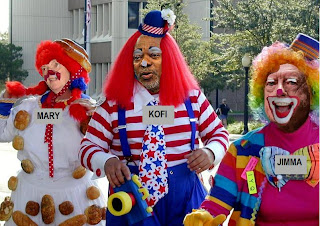 And just when you think you’ve seen enough tomfoolery where the Middle-East conflict is concerned, ‘The Elders’ adds to it by sending in these three clowns. By the way, does the organization, “The Elders” give anyone the creeps due to its Orwellian sounding name, or is it just me?

YNET: The council of world leaders launched by former President Nelson Mandela is sending a three-person team to help ease tensions in the troubled Middle East…

This trio of clowns have little to offer Israel in the way of laughs, even if they tried, for they have all taken part in one way or another, and on many occasions, in the delegitimizing of the Jewish state.

Merry Mary Robinson, the UN’s High Commissioner for Human Rights presided over the anti-Israel hate carnival in Durban S.Africa back in 2001. Though Mary Robinson deemed the accusations being leveled at Israel during the conference “to be inappropriate” she never officially distanced herself from Conference Draft declaration which stripped the following paragraph from the document:

We are concerned with the prevalence of anti-Zionism and attempts to delegitimize the State of Israel through wildly inaccurate charges of genocide, war crimes, crimes against humanity, ethnic cleansing and apartheid, as a virulent contemporary form of anti-Semitism leading to firebombing of synagogues, armed assaults against Jews, incitements to killing, and the murder of innocent Jews, for their support for the existence of the State of Israel, the assertion of the right to self determination of the Jewish people and the attempts, through the State of Israel, to preserve their cultural and religious identity.

Comical Kofi Anan. No friend of Israel. Period. Anyone who would elect an anti-Semite to mediate between Israel and the Hezbollah, back in 2006, has to either have some screws loose, or sees nothing wrong with a man who holds anti-Semitic views. Plus the man is more than willing to condemn Israeli defensive measures at every turn. The Tundra Tabloids is glad to see him gone from the UN, but not glad to his return to the world stage.

Jovial Jimmy Carter. Well the Tundra Tabloids has devoted a number of posts to the likes of Jimmy Carter, it’s enough to say that no Israeli or American politician who truly understands the issues surrounding the conflict between Israel and the Palestinians, would ever truly take Jimmy Carter seriously.

[Advice for anyone following the adventures of the “Clown Trio” while they’re in the ME. Unlike most clowns, it’s not their actions which will be humorous, but what they say.]

Perhaps when their act comes to town (in Israel), Yossi Beilin (Leftist Israeli politician best known for his involvement with the Oslo accords) will get an personal audience with them. Who should enjoy the “Clown Trio” act better than Yossi Beilin, occupier of the best ringside seat to the grossest display of Palestinian intransigence ever seen in an international three ring circus? Send in the clowns! KGS