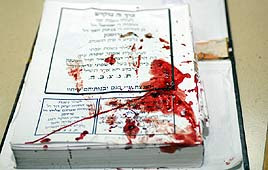 This has to be one of the worst moments for Israel in a very long time. The religious students studying their holy books were were brutally murdered in a hail of bullets by a Palestinian terrorist lusting to spill Jewish blood. The Tundra Tabloids is shocked and saddened by the savage murders and offers its condolences to the bereaved families of the slain students, no words can soothe the loss they share. The names of the slain students are as follows:

May their lives be for a blessing.

The reactions of the Palestinians after hearing the news of the massacre could be predicted, and was as revolting as the massacre its 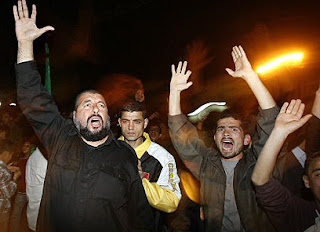 elf, one of jubilation and the passing out of sweets to all the well wishers who were thrilled that Jewish blood was spilled. The Palestinians celebrated in the very same way upon hearing the news the WTC and 3000 people were destroyed in America.

The scenes of Palestinians in Ramallah celebrating the 9/11 attacks were such a shock even for the dead Arafat, that he arranged a fake blood donation event to counter the bad press.

The Finnish media reacted in typical form, comparing the Gaza operation with the massacre in Jerusalem, as if defending one’s citizens from rockets and missiles is comparable to the cold blooded murder of religious students in a school. Totally disgusting moral equivalency. Though the Helsingin Sanomat did correctly describe it as a massacre, it refused to mention Palestinian in its headline to the article, and referred to the man a gunmen, not a terrorist. Sick. The news media is inept.

The UN Security Council convened and once again proved itself to be as immoral and corrupt as the Palestinian terrorists themselves, in its inability to issue an outright commendation due to the membership of Libya on the council.

“Most members (of the council) wanted to condemn (the attack) but Libya blocked it,” Israel’s ambassador to the UN, Dan Gillerman, told reporters. US Ambassador Zalmay Khalilzad said US efforts to issue a statement condemning the attack “in the strongest terms” failed because Libya sought to link it to its own resolution urging condemnation of Israel over the IDF operation in the Gaza Strip last week. Khalilzad criticized Libya, saying that a terror attack specifically targeting civilians could not be equated to military operations aimed at stopping rocket fire.

This brings home the issue that plagues the news media, their inability to discern the differences between intentional murder of civilians, and the defencive measures of a state that seeks to minimize the casualties among civilians as it goes after terrorists that work amongst a civilian population. As long as the news media chooses to close its eyes to the truth, they will never be taken seriously as an independent, unbiased source for news.

The fact that an Israeli-Arab group called – ‘Galilee Freedom Brigades’- has claimed responsibility for the attack, proves that Israel has a very real “Arab Fifth Column” actively working within its midst. More here. *L* KGS

NOTE: Tundra Tabloid commentator TINSC correctly notes: Remember when Baruch Goldstein unloaded his machine gun inside a Hebron Mosque? Remember the outrage? Remember how the world was outraged and the news media covered it for days on end? There was a UNSC condemnation.