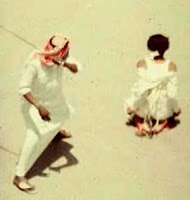 “A Canadian has been found guilty of murder in Saudi Arabia and sentenced to beheading, the Canadian government confirmed on Monday. Mohamed Kohail, a 23-year-old Montrealer who has been living temporarily in Saudi Arabia, was convicted of killing an 18-year-old student in a schoolyard brawl in the city of Jeddah in January 2007.”

If the medieval Saudi court system has it’s way, Mohamed Kohail will be indeed living temporarily in Saudi Arabia. Regardless of the brutality of the execution method –that is deeply rooted in Islamic law– here again, the facts to the case show just how corrupt the Saudi system is.

Family friends urged the Canadian government to intervene more forcefully, alleging that Kohail was the victim of an unfair investigation and trial. “I want the government here to ask on what basis the Saudi government decided this was first-degree murder,” Mayada Jabri told Info690, a Montreal radio station.”It was the influence of the [victims’] family which got a verdict that was not fair. I only want justice.”

One family friend, who asked not to be named, told the Canadian Press the court ignored evidence that would have cleared Kohail’s name. He said the young man’s lawyers were repeatedly denied access to the courtroom. He said Kohail’s parents are livid. “They don’t believe by any means they got a fair trial,” he said.

Corruption runs deep in any totalitarian system, religious or otherwise. In the case of Saudi Arabia which rules by Islamic law (shariah), the corruption of their system of jurisprudence is compounded by the religious and political element of Islam, that entwines supposedly “god’s laws” with the complete running of the state.

The combination of Islam and a totalitarian governmental system makes the circumstances surrounding the Mohamed Kohail case, a very common occurrence. The sad truth is that Saudi “justice” is dished out in a very arbitrary way, especially when one of the victims belongs to a family with allot of connections. The verdict can only go one way, guilty, and off with the head!

The culture of beheading in Islam is so deep, that even a mentally deranged man can take to the knife without giving it a second thought.

JEDDAH, 3 March 2008 — Early morning shoppers at a supermarket in Jeddah were left reeling yesterday, with some falling unconscious, after a well-built Syrian man clinched a knife and decapitated his 15-month-old nephew in front of his mother in the store’s fruit and vegetable section. In a brutal murder that has shocked the city, the 25-year-old man beheaded the boy, who was out shopping with his mother — in full glare of shoppers and staff at Al-Marhaba supermarket on Sari Street around 9.30 a.m.

The man, who is the boy’s maternal uncle, apparently killed the boy following a dispute with his sister and brother-in-law. Eyewitnesses said that the man picked up a knife from inside the store and severed the boy’s head. The mother and a shopper standing close by fainted, while several other stood in shock and disbelief over what had happened.

Obviously the work of a deranged man, but when the cutting off the head happens to be mainstreamed in Saudi society, it’s understandable that the method came quite easily to the mind of the lunatic. It’s a sad story every which way you look at it. More here. *L* KGS