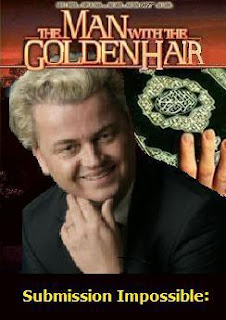 According to the Washington Times, the Dutch MP, Geert Wilders has finished his 15 minute movie of the Qur’an. Mr. Wilders said the film will be finished tomorrow (30.02.08)and will be posted on a Web site, http://www.fitnathemovie.com/, when it airs on television.
Wilders:“The film will show that the Koran isn’t a dead work, but the face of Islam — a tremendous hazard,”
Steven Schwartz, a western convert to Islam has this to say about the movie:
Stephen Suleyman Schwartz, director of the Washington-based Center for Islamic Pluralism, said it was “strange” and “ahistorical” to think that a 1,400-year-old text could become a threat to the West.
Mr.Schwartz would have a very difficult time, if not an impossible one, in trying to prove that such a history ever existed. Professor Efraim Karsh from King’s College, University of London, has thoroughly documented Islam’s threat to the West throughout the centuries, in his scholarly work “Islamic Imperialism A History“. Here is an excellent interview of Karsh concerning the book.
Another scholar worth mentioning is the Tundra Tabloids’ good friend, Dr.Andrew Bostom, whose extensively documented book “The Legacy of Jihad“, details the centrality of the Qur’an and Islamic thinking behind the Jihad ideology throughout the history of Islamic hegemony. The Tundra Tabloids gives Dr.Bostom’s book its full endorsement, purchase it and read!
Schwartz continues:“My advice to Muslims is to ignore such trivial provocations, maintain their dignity and faith and work to improve their communities,” Mr. Schwartz said. “Mr. Wilders has a right to make whatever films he wants and Muslims have a right to ignore them.”
That is a suggestion by the way, that the Tundra Tabloids wishes the entire Islamic world would endorse. But most importantly, at the minimum, there are some 91 million jihadis out there who would be willing to tear Mr.Schwartz from limb to limb, for supporting such a radical idea.

Perhaps the Geert Wilders‘ film will be provocative, but what is more provocative is the inconvenient truth about Islam, that “supposed religion of peace”, promotes and espouses violence against the unbeliever and apostates, as well as demanding the head of those who dare to criticize its totalitarian precepts. Now that’s what the TT calls provocative. More here. *L* KGS