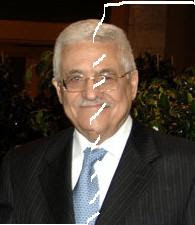 By their own words you shall know them. Palestinian Media Watch sends a bulletin concerning the Jordanian daily Al-Dustur’s recent interview with Mahmoud Abbas the ‘moderate’, the president of the Palestinian Authority.
For many who believe in the myth of Abbas’ moderation, the following excerpts from his interview with the Jordanian paper will be very disheartening.
PMW: Palestinian Authority President Mahmoud Abbas said Wednesday that he doesn’t rule out armed conflict against Israel. He also said that he was “honored” to have fired the first bullet of the Fatah terror organization in 1965, and to have taught terror tactics around the world, including to such groups as Hizbullah.

In an in-depth interview published today in the Jordanian daily Al-Dustur, Abbas said that the PA is “unable” to pursue armed conflict for now, but said that “in the future stages things may be different.”

He rejected Israel as a Jewish state, and said that it was the PA’s rejection of Israel’s Jewishness that almost aborted the Annapolis Conference last November.

Abbas said that he won’t demand that Hamas recognize Israel. In fact, as PMW has reported in the past, he said that the only “recognition” of Israel he demands of a Palestinian unity government is to recognize Israel as its adversary.

Here are some highlights from that interview:

The Arab Situation
“Now we are against armed conflict because we are unable. In the future stages, things may be different… “

The Resistance [Editor’s note: PA euphemism for terror]
The Palestinian President spoke about the resistance, saying: “I was honored to be the one to shoot the first bullet in 1965 [Fatah terror against Israel began in 1965] ,and having taught resistance to many in this area and around the world, defining it and when it is beneficial and when it is not… we had the honor of leading the resistance.We taught everyone what resistance is, including the Hezbollah, who were trained in our camps [i.e. PLO camps in the 60s and 70s].”

Recognition of Israel
“I don’t demand that the Hamas movement recognize Israel. I only demanded of the [Palestinian] national unity government that would work opposite Israel in recognition of it. And this I told to Syrian President Bashir Assad, and he supported this idea.” Al-Dustur, February 28, 2008

Mahmoud Abbas is no moderate, no matter how hard one squints the eye and plugs the ear. This is the kind of pseudo “moderate Arab partners for peace” that Israel has to deal with, …or not. *L* KGS