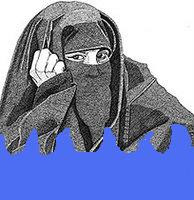 Two Muslim women sporting long veils, long pants and shirt sleeves in a swimming hall in the Swedish city of Gothenburg, were asked to either change their clothes or leave. They chose to file a complaint over alleged discrimination, but had their case thrown out of court.
A Swedish Court of Appeals then overturned the District Courts decision to dismiss the case, and now the City of Gothenburg has been forced to spend more time and tax payers money -on a ridiculous case that should never have been heard in the first place- in its appeal to the Supreme Court.
A month ago, the Court of Appeal for western Sweden found the city guilty of ethnic discrimination and ordered it to pay the women 20,000 kronor ($3,230) each in damages. The city had been sued by the Discrimination Ombudsman (DO). The women, Houda Morabet and Hayal Eroglu, were at the pool accompanying their children but had no intention of swimming themselves.
Both were wearing veils, long pants and long-sleeved tee-shirts because their religion does not allow them to reveal parts of their body in public.The life guards considered the women’s clothing hazardous as it could inhibit their ability to swim if they fell into the pool.
Now imagine if the two women had fallen in the pool, then drowned. YOU CAN BE ASSURED that the Muslim community that is supportive of the two women’s case, would most likely be suing the City of Gothenburg for damages on behalf of the women’s families.
The women were correctly instructed by the person in charge to either change their clothes or vacate the swimming area. This is another test of whether everyday common sense loses to the insane policies of political correctness. The question that remains -which the Swedish Supreme Court’s decision will answer- is Sweden in over its head with its placating of whining Muslim demands, and will the Swedes eventually submit to sharia? We shall see. More here. *L* KGS