AND THE SURVEY SAYS: “Only 91 Million Jihadis in the World Today” ! 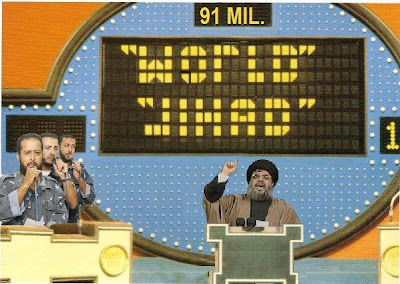 If the Gallup poll is correct, that means there are at least 91 million Muslim jihadists around the world, who would either participate or help to fund the international jihad against the West!

The survey, conducted by the Gallup polling agency over six years and three continents, seeks to dispel the belief held by some in the West that Islam itself is the driving force of radicalism.

It shows that the overwhelming majority of Muslims condemned the attacks against the United States on September 11, 2001 and other subsequent terrorist attacks, the authors of the study said in Washington.

“Samuel Harris said in the Washington Times (in 2004): ‘It is time we admitted that we are not at war with terrorism. We are at war with Islam’,” Dalia Mogahed, co-author of the book “Who Speaks for Islam” which grew out of the study, told a news conference here.

“The argument Mr Harris makes is that religion in the primary driver” of radicalism and violence, she said. “Religion is an important part of life for the overwhelming majority of Muslims, and if it were indeed the driver for radicalisation, this would be a serious issue.”

But the study, which Gallup says surveyed a sample equivalent to 90 percent of the world’s Muslims, showed that widespread religiosity “does not translate into widespread support for terrorism,” said Mogahed, director of the Gallup Center for Muslim Studies.

About 93 percent of the world’s 1.3 billion Muslims are moderates and only seven percent are politically radical, according to the poll, based on more than 50,000 interviews. In majority Muslim countries, overwhelming majorities said religion was a very important part of their lives — 99 percent in Indonesia, 98 percent in Egypt, 95 percent in Pakistan.

But only seven percent of the billion Muslims surveyed — the radicals — condoned the attacks on the United States in 2001, the poll showed. Moderate Muslims interviewed for the poll condemned the 9/11 attacks on New York and Washington because innocent lives were lost and civilians killed.

“Some actually cited religious justifications for why they were against 9/11, going as far as to quote from the Koran — for example, the verse that says taking one innocent life is like killing all humanity,” she said. Meanwhile, radical Muslims gave political, not religious, reasons for condoning the attacks, the poll showed.

The survey shows radicals to be neither more religious than their moderate counterparts, nor products of abject poverty or refugee camps.
“The radicals are better educated, have better jobs, and are more hopeful with regard to the future than mainstream Muslims,” John Esposito, who co-authored “Who Speaks for Islam”, said.

“Ironically, they believe in democracy even more than many of the mainstream moderates do, but they’re more cynical about whether they’ll ever get it,” said Esposito, a professor of Islamic studies at Georgetown University in Washington.
Gallup launched the study following 9/11, after which US President George W. Bush asked in a speech, which is quoted in the book: “Why do they hate us?”
“They hate… a democratically elected government,” Bush offered as a reason.
“They hate our freedoms — our freedom of religion, our freedom of speech, our freedom to vote and assemble and disagree with each other.”

But the poll, which gives ordinary Muslims a voice in the global debate that they have been drawn into by 9/11, showed that most Muslims — including radicals — admire the West for its democracy, freedoms and technological prowess. What they do not want is to have Western ways forced on them, it said.

“Muslims want self-determination, but not an American-imposed and -defined democracy. They don’t want secularism or theocracy. What the majority wants is democracy with religious values,” said Esposito. The poll has given voice to Islam’s silent majority, said Mogahed.

“A billion Muslims should be the ones that we look to, to understand what they believe, rather than a vocal minority,” she told AFP. Muslims in 40 countries in Africa, Asia, Europe and the Middle East were interviewed for the survey, which is part of Gallup’s World Poll that aims to interview 95 percent of the world’s population.

Now after reading that drivel, don’t you feel all fuzzy and warm inside? It’s not the Islamic world or its religion at fault, it’ our “western ways” being forced upon them”. Like the respect for human/civil rights, and protection of women and minorities. I also wonder how many of those who took part in the Gallup Poll answered honestly? The Tundra Tabloids wagers that out of the percentage of those who answered the poll, it was the 7% (91 Million people) who answered more honestly. More here. *L* KGS.

NOTE: Robert Spencer at Jihad Watch comments about the billion Muslims who should be the ones that we look to, to understand what they believe, rather than a vocal minority:

Yes, we should look to them, and ask them why they aren’t doing much of anything to challenge that 91 million.