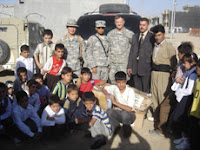 The Keskisuomalainen once again publishes another brainwashing smear, this time against the US military working inside Iraq. This is the kind of “journalism” which can be expected on a day to day basis, with the Finnish News Agency (STT) delivering a steady flow of skewed reports to the rest of the news outlets in Finland.
KS: Atrocities Tell of Soldiers’ Frustration.
According to University of Helsinki professor, Martti Koskenniemi, in an interview conducted by the STT journalist, Pirtta Rautavuori, and published in the Central Finland newspaper, US soldiers are so frustrated with their time in Iraq, which explains the Hadith massacre and the “torture” in Abu Ghraib. The professor also takes a stab at the relations between the average Iraqi citizen and US Coalition soldiers, painting them as being “bad”, as well as claiming that US objectives in Iraq have not been achieved.

— American (military) training is different from the Europeans. They’re trained for hardened battle whose objective is not peace keeping or safe guarding the people’s well being. They are Imperialist soldiers, who are trained to kill.

The professor continues his chastisement of the US, which concerns the implementation of the Fourth Geneva Conventions.

— It tries to slip out of it statutes, though the US says now and then that the old treaties do not reflect present day realities, because the nature of war has changed. The wrong doer of course always talks like this.

Here’s a response to the misguided professor’s claims.

Cultural differences. Perhaps if this interview had taken place back in early 2004, I would have been more understanding of his position. Back then, the situation in a post war Iraq was indeed one of uncertainty, confusion, and a general misunderstanding of the other, in short, huge mistakes were made. But using both the situations and mistakes made in the past, to try and characterize what’s going on inside Iraq today, is sheer nonsense.

To do so, one would have to entirely overlook the strategy of General David Petraeus’ surge tactics that have been in play for over 10 months now. They have been a real success story, that only this man could have pulled off, since he wrote the strategy that’s currently being implemented in beating the insurgency in Iraq. Winning the hearts and minds of the everyday Iraqi is the number one goal, which greatly contrasts with what the professor is saying.

The role of a military force. Koskenniemi’s understanding of what an army stands for, rests pretty much on the hope of never having to need it. No more training for war, that helps to ensure that the other dumb bastard dies for his country instead of yourself. A good example of the professor’s thinking, can be found in Sweden. The Swedes’ biggest battles of late, involves the fighting over its own military symbols, which date from a time when they really meant something. You see, Sweden just doesn’t do war anymore. They rely on others to do the dirty work for them.

War evolving. It’s undeniable that the dynamics of war has changed dramatically from the days when US forces were engaged in fighting Hitler’s Germany. Old conventions governing war no longer reflect the true realities of today’s fighting. What academics like Koskenniemi would like us to overlook, is the rise of private militias who owe no allegiance to any single state or sovereign entity.

Private terrorist militias like al-Qaida fall between the cracks in the Geneva conventions, which were framed around the idea that rules regulating armed conflict between states, would firstly seek to safeguard the lives of the civilian populations in or around the conflict. Today’s privately run terrorist militias would like nothing better that to see civilians drawn in to the conflict, because for the terrorists, civilians are the chief target.

This professor is one of the most respected international lawyers in Finland. Koskenniemi is also one of the worst naysayers of US foreign policy as well as Israel’s defencive policies vis-à-vis the Palestinians, that I’ve ever heard. Koskenniemi ends by saying:

“An occupying army (like in Iraq) can’t be completely fault free, because of the fact that the opposing side hides in and amongst the civilian population.”

Perhaps the visit by Israel’s Senior Legal Advisor to the MFA, Daniel Taub, a couple of weeks ago, might have had a softening effect on Martti Koskenniemi’s hardened views. The two held a private meeting together which the Tundra Tabloid’s would had loved to have attended. *L* KGS

NOTE: For more info on what the US is doing inside Iraq, check this out.