DISGUSTING. Just how superficial and biased can a journalist get? In yesterday’s edition of the Keskisuomalainen, central Finland’s largest news daily, “ace reporter” Juhana Lepoluoto tries to cast Iraqi photographer, Bilal Hussein as the hapless “victim” of a US Pentagon vendetta against him.
*** Pulitzer-Pictures Were Too Much For The Pentagon ***
Hussein became a recipient of the coveted Pulitzer-Prize for one of his pictures, of four men supposedly engaged in a battle against US Coalition forces in Fallujah, which was at the time a hot bed for Al-Qaida terrorists and other insurgents. 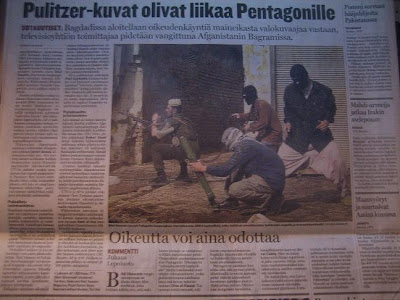 The Finnish journalist for the Keskisuomalainen’s foreign news section, devotes an entire half page to promote the assumption that Hussein was “just a photographer” taking pictures from the other side of the conflict. He depicts him as a kind of mirror image to the journalists and photographers viewing the Iraq war from the other side of the fighting.

The facts that loom behind the Bilal Hussein incident have been reported on in great detail by Michelle Malkin and other bloggers throughout the blogosphere, with one major point that keeps resurfacing time and again. The man cannot be deemed in the same light as other journalists and photographers, simply because they are not using their profession to propagate propaganda. 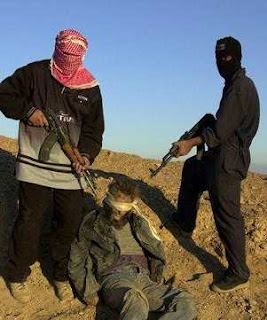 They are not guilty of staging photographs with the US Coalition’s forces for great, and very memorable photographs. Most of the evidence uncovered to date, heavily suggests that Bilal Hussein was guilty of doing just that, collaboration. The US military at the time of Hussein’s arrest stated that:

The military said bomb-making materials were found in the apartment where Hussein was captured but it never detailed what those materials were. The military said he tested positive for traces of explosives.
But it comes as no surprise to the Tundra Tabloids that the very superficial journalist, Juhana Lepoluoto would try to cast the Iraqi collaborator as a hapless victim of the US Pentagon, for photographing “the real story” going on inside Iraq. 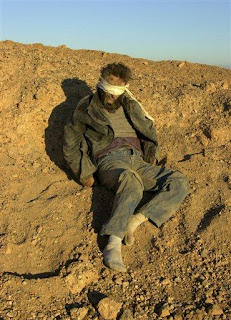 He has been busy casting the US and Israel in the worst possible light for as long as I can remember. After looking more closely at Bilal Hussein’s “work”, it becomes more apparent that he is guilty of staging many of his photographs with his “insurgent buddies”, for the most dramatic effect.

I mean, come on, look at the photos of this Italian hostage about to be executed, clearly the photographer was in collusion with the men who were about to commit a war crime. Is this the kind of “professional journalism” that deserves to be treated with respect and honours.

Juhana Lepoluoto surely thinks so. He is of the opinion that he’s being treated unfairly, and that he is just like any other western journalist, it’s just that he’s covering the same angle from the others side. B*ll Sh*t.

Here’s what Bilal Hussein had to say about the US attack on Fallujah:

By Tuesday afternoon, as U.S. forces and Iraqi rebels engaged in fierce clashes in the heart of his neighborhood, Hussein snapped.” U.S. soldiers began to open fire on the houses, so I decided that it was very dangerous to stay in my house,” he said.” I decided to swim … but I changed my mind after seeing U.S. helicopters firing on and killing people who tried to cross the river.”

He watched horrified as a family of five was shot dead as they tried to cross. Then, he “helped bury a man by the river bank, with my own hands.””I kept walking along the river for two hours and I could still see some U.S. snipers ready to shoot anyone who might swim. I quit the idea of crossing the river and walked for about five hours through orchards.”

When the words of Hussein are placed alongside the photographs he takes, than a very familiar pattern begins to emerge, which closely resembles what took place in the Lebanese/Israeli war in 2006, and on a daily basis in the Palestinian areas of Gaza and the West Bank.

A more serious and balanced journalist would have at least brought this out into the open, for the readers to decide themselves, what is reasonable and what is not, after looking at all the facts. But Lepoluoto is the kind of Finnish journalist who decides on those things for you, with all of the other details being considered mere distractions to his version of reality. How nice is that? *L* KGS

NOTE: The original article is for the moment not available online.