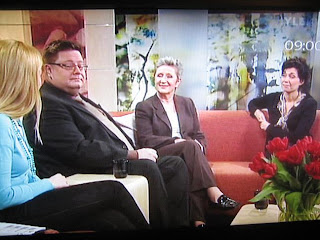 Though the discussion took place last Friday, I still view what was said on YLE’s Jälkiviisaat program to be newsworthy enough to be mentioned on Monday.The Friday morning program always ends with a discussion between a few talking heads, who discuss the current events that happened during the week.

All three offered statements as to the reasons why the Danish press republished the cartoon of Mo with a bomb in his turban. There is an old saying that when someone wants to provoke another, you “kaiva verta nenästä“, (dig blood from the nose) and all three clearly thought that that was something which shouldn’t be done.

But the whole reason for the republishing of the picture of Mohamed was to show that the westeren media cannot be intimidated. That if one of their members is threatened by extremists, the rest will show their support. These three couldn’t get past talking about how holy Mohamed is to the Muslim world, and that we need not “unecessarily provoke others”.

Janne Mäkinen: “I understand the rage of the media, which was a reaction to someone being targeted for murder, BUT, it was short sighted, it was a strong expression by all the media, but I’m afraid…perhaps the Danish Muslims will understand it, but the world won’t. This is nothing but digging blood from the nose.”

Soili Suonoja: “It’s just digging blood from the nose in vain, I’m not even sure if it was in defence of freedom of the press. I remember that professor Jaakko Hämeen-Anttila noted that Mohamed is holy to Mulsims. And if you are a good friend of mine, I’m not going to do something that is going to be hurtful to you.

Kirsi Piha: “It’s a scary situation now if we are going to threaten one another with what we publish and such like, that can never be defended in a western democracy (all nod heads ..YES). And I do understand this was a reaction to what happened, not a provocation, (all nod heads..YES)”

THE SECOND GUESSERS better GUESS AGAIN because right now they are CLUELESS as to the reasons why the West needs to sound with one clear strong voice to the Islamic world. Sniviling and bed wetting will just get you more fatwas and chest thumping by the Islamic thugs who are more than delighted to dictate to their supposed dhimmis on how to behave.

Unbelievable that theses people from the far Left to the Right could sit around and do a cumbaya collective hand-wringing, while giving absolution to the 7th century mentality that passes for normal in that part of the world. *L* KGS