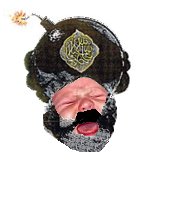 Bwaaaaaaaaawh! That’s the sound emanating from the Islamic world concerning the Danish news media’s reaction to the plot by Muslim terrorists, to murder Kurt Westergaard, the cartoonist who drew one of the more famous pictures of Mohamed.

17 Danish newspapers republished Westergaard’s cartoon depiction of Mo, and its got the Islam-O-crybabies all upset again. As I reported earlier, even the mamsy-pamsy Helsingin Sanomat republished a picture of the newspapers that actually published the pictures.

Actually the HS wanted a way out if the Muslims started screaming bloody murder in their direction. They could fall back on the defence of: “they didn’t publish the actual picture, just a copy of it”. The Helsingin Sanomat forced itself into a corner when the EIC, Janne Virkkunen said almost two years ago that the HS would consider publishing the pics, only if the issue of the already publicated cartoons became a matter of news. So now they had to do it, but they took the coward’s way out.

Now the Kuwaitis are demanding their pound of flesh, with their MP’s demanding in parliament that the Kuwaiti government break all political ties with Denmark, as well as place a boycott on all Danish products. some are even calling for a “USD 36.5-million fund to defend the Prophet and Islam from being insulted.”

BWAAAAAAAAAWH!!! Poor Mo is offended, but how are the followers of Mo, really to know, just how far Mo would go..? *L* KGS

Note: The Muslims will just have to face the fact that, the greater part of the Muslim world involves itself in Mo worship. They may deny it, but in word and in deed, they are bowing to the great Moe!