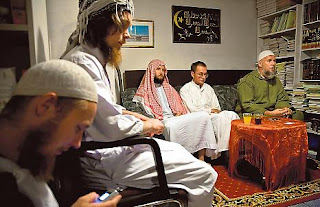 Or at least not yet. The establishment of the Finnish Islamic Islamist Party, (FIP) and the negative publicity that has surrounded it, has brought a fresh round of headaches to the Finnish Islamic Council that was itself founded just over a year ago. According to the FIC’s chairman of the executive, Anas Hajjar:

Those “few statements” Hajjar alludes to, are the FIP’s stated intention to establish sharia in Finland, which includes among other things, the rejection of music classes for Muslim students as well as other Islamic religious demands. The FIC is more cautious in their statements, which means, that they don’t necessarily disagree with the FIP, but that they should be more gaurded in expressing their true aims and goals.

But wait, that’s not all, Hajjar continues:

“We have felt that we can achieve our goals in other ways than by taking part in politics. Societal activities are something that we see in the future, but they are not our priority at this moment.”

Got that? The Islamic umbrella group that includes 18 other Islamic organizations, doesn’t really disagree with the Finnish Islamic Party’s founding, but that the timing for such a party isn’t right. In other words –after reading between the lines– their numbers are such (25-30 000)that they are not able to mount an proper defence of an Islamist agenda. They are getting their noses bloodied in the Finnish media and can’t do a thing about it.

You see, the media is very fickle here, they won’t go out of their way to publish a picture of Mohamed, but they will take to task the Islamists within Finland who openly announce their true goals of changing Finnish society to accomodate their religious/political demands.

The recent statements coming from the FIC about the Finnish Islamic Party, are as worrisome as the stated goals of the FIP itself, which is made up of Finnish converts to Islam. The Finnish converts have not yet learned the Islamic art of “taqiyya” (deception for religious/political reasons), something which Anas Hajjar has clearly more experience with. More here. *L* KGS

Anonymous: In Helsingin Sanomat, Anas Hajjar says that “Muslims have been an influential force in Finnish society and Finnish politics for decades”. It would be interesting to learn what concrete evidence there is about this “influentialness” of theirs! Sure, Finnish society adheres to the current multicultural holy writ as do all other Western countries, but what specific inroads mr. Hajjar thinks Muslims have made in Finland? What outstanding accomplishments or great skills they have shown here, expect skills in demanding fatter welfare checks and dispensations (I know, for I have worked in the field of social services)?

The Tundra Tabloids adds, that the Islamic Tatar community, the first ever Islamic community in Finland, has assimilated itself thoroughly into Finnish society. Though amongst their number are many devout Muslims, they have never seen the need to address the religious/political status quo in Finland, in order to exact a greater role for their faith. They have conducted themselves in much the same manner as the Jewish community in Finland. Both groups by the way, are indistinguishable from the Christian Finnish majority.