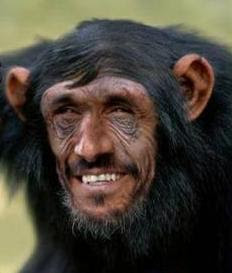 The rantings of a chimp while hanging from his vine.

Ahmadinejad: “Despite the fact that the Lebanese nation has lost a great commander – there are hundreds of thousands, even millions more Haj Radwan’s (Mugniyah’s nickname) who possess the same courage and resolve to join the struggle against the occupiers, the terrorists and the uncultured.”

Mahmoud Ahmadinejad showers his praise upon a man who in cold blood, cruelly murdered perhaps thousands of people. This Sleeze Monkey’s words prove not only his own immorality, but the entire Iranian government’s as well.

Mottaki: “Mugniyah is a source of pride to all believers”

You can place the word “Muslim” before the word “believers”, for that is what Iranian Foreign Minister Manouchehr Mottaki was implying. You see, we only need to observe what the leaders in the Islamic world are saying, to understand what they themselves believe Islam to mean.

NOTE: The loss of Mugniyah to Iran has been heavy, being the so called “linchpin” between Iran and its international terrorist infrastructure. But as Calev Ben-David warns, “Still, some degree of perspective is called for here.”