The Archdhimmi of Canterbury, Dr. Rowan Williams is in backtrack mode, after his call to allow for the spreading of sharia throughout the UK. Melanie Phillips is all over this one. 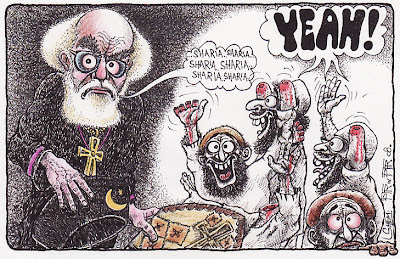 The man doesn’t even have the courage of his lack of convictions. Far from defending what he actually said about sharia law, the Archbishop of Canterbury is fighting to save his job by frantically back-tracking and claiming he has been misunderstood.

It was all got up by the tabloids… no-one actually read the lecture… people have jumped to the wrong conclusion from a few misleading headlines. Ye gods. What planet is he living on? Everyone heard what the man actually said on the World at One; by now, many have heroically ploughed through his lecture as well.

The Archbishop made no proposals for sharia in either the lecture or the interview, and certainly did not call for its introduction as some kind of parallel jurisdiction to the civil law. Instead, in the interview, rather than proposing a parallel system of law, he observed that ‘as a matter of fact certain provisions of sharia are already recognised in our society and under our law’.

When the question was put to him that: ‘the application of sharia in certain circumstances – if we want to achieve this cohesion and take seriously peoples’ religion – seems unavoidable’, he indicated his assent. This implies that it was only in answering a question that he coyly agreed that the use of sharia was unavoidable. But he was actually promoting this idea himself as a desirable development. And as for not having proposed a parallel system of law, this is simply untrue.

In his lecture, he said in terms that he was talking about the state recognising sharia in certain circumstances as a ‘supplementary jurisdiction’. It was a central argument of this lecture that the state, which already recognised some provisions of sharia (alas, too true) should recognise other provisions such as family law, and that individuals should be able to choose which system they wanted, in……. More here.

The man is clearly trying to save his job, hence all the dissembling presently going on. Like the Tundra Tabloids has mentioned before, Rowan Williams should be shown the door and be given the boot. Sharia in Europe is not an option. *L* KGS