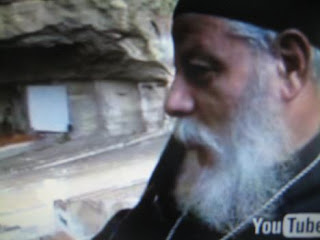 This breaks the heart. No greater example of Islamic subjugation of non-Muslims can be shown. Coptic Christians living in Cairo are forced to live in unspeakable filth, with rats nibbling on the ears of their children.

The Coptic priest interviewed, speaks of gross discrimination by the Muslim state against Egypt’s Christians. His church was literally carved out from a side of a hill because it is near impossible to get permission for a church to be built.

An excerpt from the video of the interview between the local Coptic priest and the British journalist.

“Interviewer: You need permission to build a church, and that permission takes a long time. and rarely if ever given at the end of the day. How do you feel that you can’t necessarily build a church this size above ground, somewhere nice?

Translation of priest’s response: He claimed that Christians are discriminated against by law. His says that if you are able to build a mosque, which you can in Egypt, you should be able to build a church and you can’t, you can’t get their permission, and he said that’s not right.

They should not be treated as Muslims or Christians, you should be just treated as people, as citizens of Egypt.

This is typical of the discrimination against non-Muslims throughout the Islamic Middle East. And while we have Islamists demanding their “rights” in Europe, for an example the Finnish Islamic Party, with its demands for more mosques to be built, Christians living in Muslim lands are not able to build any at all.

Muslims have been given the right to build their mosques pretty much all over Europe. But I say that there should be a halt to any more mosque construction here in the West, until there are indentifiable signs of reciprocity in the Middle East. This video proves that the Islamic command for the non-Muslim to feel humiliated, is alive and well and in full practice. *L* KGS

There are two more segements to the video: Part Two and Part Three. Via Solomon