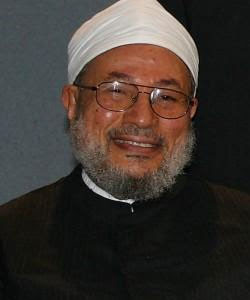 Sheikh Yusuf al-Qaradawi, 80 has been refused entry into the UK. Finally the UK is getting something right, after Red Ken’s pandering to the Islamist back in 2004. I wonder what the Islamic Society of Finland has to say about Al-Qaradawi’s rejection?

The ISF has the terrorism loving, homophobic Islamist linked on their website here. Funny, no Finnish human rights groups ever bothers to mention that this racist homophobe has a following here.

“An Islamic preacher who has called for gay people to be put to death has been denied entry into the UK for medical treatment. Sheikh Yusuf al-Qaradawi, 80, was at the centre of a row in 2004 when he came to London as a guest of Mayor Ken Livingstone, who was then heavily criticised by gay rights campaigners and Jewish organisations for inviting him.

The spiritual leader of Islamicist organisation the Muslim Brotherhood, al-Qaradawi is known to have supported suicide bombings in Israel, the oppression of women’s rights and has argued in the past that homosexuals should be put to death. The Home Office today announced he would be refused entry over concerns his presence “could foster inter-community violence.”The UK will not tolerate the presence of those who seek to justify any act of terrorist violence.” 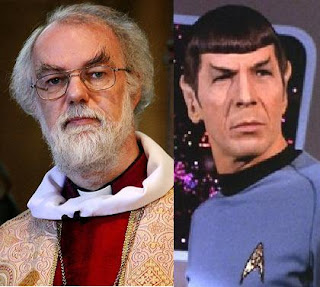 UPDATE: But wait, the Tundra Tabloids
spoke too soon!

Sharia law in UK is ‘unavoidable’

“The Archbishop of Canterbury says the adoption of certain aspects of Sharia law in the UK “seems unavoidable”. Dr Rowan Williams told Radio 4’s World at One that the UK has to “face up to the fact” that some of its citizens do not relate to the British legal system.”

Though the Archbishop of Canterbury, Dr.Rowan Williams, bears an uncanny resemblence to Spock, that’s as far as it goes. The man clearly lacks both the intellect and the logical mind of the Star Trek character. While one Bishop warns of no go zones for non-Muslims, this guy shrugs his shoulders and says ….oh well. What a major boob-a-saurus. More here.

NOTE: I fully recommend getting your hands on anything Patrick Sookhdeo has written.