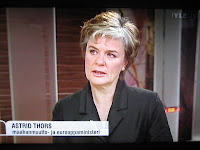 The topic concerned the growing frustrations and fears of independent businesses in Finland, towards the increase of immigrant workers, and the dangers they may pose in regards to terrorism. There have been concerns raised, as to whether or not proper background checks have been made of these potential workers.

MP Arja Karhuvaara from the National Coalition party believes that such fears are valid enough, considering the risks involved, to warrant the concerns to be taken seriously by the Finnish government. Minister of Immigration and Europe, Astrid Thors steps in, and dismisses such claims outright. Here is just a portion of what she said, which illustrates how far removed she is from the land of logic and reason.

TV show host: (paraphrased) The question today is whether the foreign background of immigrants coming to Finland to work and live, need to be checked more thoroughly than it is now, in regards to terrorism? A National Coalition written request to the government has been issued concerning, what the procedures are in place now and in the future, to check the backgrounds of immigrants and new Finns that will ensure Finland from a massive, destructive terror strike.

Immigration and Europe Minister Astrid Thors: It can be said that the overwhelming majority of [Finnish] officials do not share that concern, and if we begin to contemplate about it, we could….of course we have to look at and anticipate everything connected with terrorism.

They want publicity, and through their own acts to draw attention to themselves. The biggest risk in regards to terrorism, is their wanting to revenge because Finland is involved in peace management [in Afghanistan], but ….[she then lets out a long rambling of unclear thoughts that shows she hasn’t a grasp of the situation] …..we have ways and means to checks things.

[But here is the real message Thors wanted to say from the very beginning.] She continues:

And then there is the want to categorize, that people, according to their backgrounds are so different. As the example around Europe clearly shows, terrorism is such, that its very difficult to anticipate and ‘what moves in the minds of the young’ ? I think of the British happenings, what was going on in the minds of the young that made them want to take a different direction in their lives?

Is she for real? It’s called jihad Astrid Thors, and the people currently employing that ideology are Muslims. She refused to even mention the fact that these British “youths” are/were all juiced up for their Allah, and that the “things going on in their heads, were thoughts of jihad planted there by radical imams, while silly civil servants like herself, twiddled their thumbs and looked the other way.

Please be reminded that this is the woman who is calling for massive immigration to Finland, and she is loathe to do background checks on immigrants coming here. I say give her the boot and put someone else more qualified, and not brainwashed with politically correct multiculturalist nonsense. The end. *L* KGS

NOTE: What we do not want here in Finland, is the same phenomenon that is happening all over the EU. Rampant Islamic Jew-Hatred.