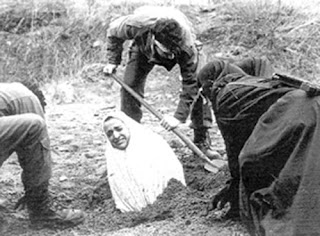 The 7th century Islamist nightmare that is Iran, has condmened two sisters (known only as Zohreh, 27, and Azar ) to be buried up to their chests and stoned to death for ‘adultry’.

The two women have already been forced to endure the cruel practice of flogging, with both receiving the lash 90 times. But not even that barbaric practice was good enough for the misogynist run mullacracy, the females must be made to suffer the inhumane punishment of being executed by the pelting of stones by an enraged mob.

Two Iranian sisters convicted of adultery face being stoned to death after the supreme court upheld the death sentences against them, the Etemad newspaper Monday quoted their lawyer as saying. The two were found guilty of adultery — a capital crime in Islamic Iran — after the husband of one sister presented video evidence showing them in the company of other men while he was away. “Branch 23 of the supreme court has confirmed the stoning sentence,” said their lawyer, Jabbar Solati.

“I was a teacher and loved my job but my husband did not let me work… he was always suspicious of me and thought our differences were because I had an affair,” she was quoted as saying by the daily. “I do not approve the confessions that I made in the investigation phase and I deny what I said,” she said.

The words I have to describe my anger over this outrage, are too strong to print here. I call on all of the Tundra Tabloids’ readers to pick up a phone and call the nearest Iranian embassy and voice your outrage. It’s the only means we have to influence the fate of these two women. More here. *L* KGS

NOTE: Here are the contact details for the Iranian embassy in Helsinki, Finland.

NOTE: The Iranians are keeping the full names of these two women a secret, in order to limit the success of any international campaign trying to their death sentences commuted.