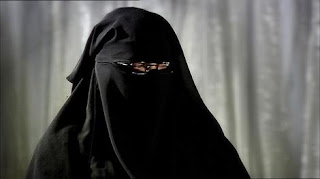 RABIAH HUTCHINSON, the Mudgee-born grandmother accused of being the “grand dame” of extremist jihadis in Australia, says she has limited sympathy for the victims of the Bali bombings because those holidaying on the Indonesian island engaged in pedophilia and drug taking.

So Ms. Hutchinson, a former hippie turned Wahhabist Muslim in Indonesia, back in 1973, and Raisa bint Alan Douglas, [another convert to Islam] are not in agreement with the PC line that Islam is a religion of peace. Perhaps we should be paying more attention to what these people are saying, than to our politicians and Islamist apologists.

The two women took part in an Australian ABC television program called, Jihad Sheilas, that is scheduled to air tonight . These ladies are under no illusion that their religion validates the violence and mayhem being committed in the name of Islam.
I would really like for the Tundra Tabloids’ Muslim readership to weigh in on the subject. Please tell us exactly where these two women, and the jihadists they support, stray from the original precepts laid down by Mohamed? More here. *L* KGS

“As a clinical forensic psychologisgt I would very much like to undertake a psychologial assessment of these two.Actually I would pay to do this. “