Dr.Andrew Bostom reveals how today’s battle against Islamist jihadism should be handled in much the same way as during the post WWII era, when the US demanded reform of Japan’s state religion, Shintoism. It worked then, it’ll work now. We just have to insist on properly defining the problem. More here. *L* KGS 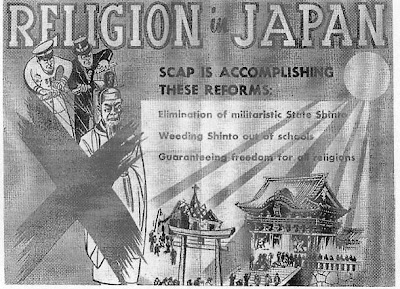 Professor John David Lewis, in a recent analysis dedicated to the late General Paul Tibbets (d. 11/1/07), commander of the B-29 Enola Gay which bombed Hiroshima, analyzes how the defeated Japanese reformed their nation, dramatically, “under stern American guidance.”

Central to this process was a complete delegitimization and disenfranchisement of Japan’s religio-political state religion, post Meiji Restoration (1868) Shintoism. These wrenching reforms of Japanese Shintoism included eliminating Shinto State militarism, and its indoctrination within Japanese schools, concurrent with the guarantee of true religious freedom—including the practice of Shintoism as a private, de-militarized, and de-politicized personal faith—under the Supreme Commander of the Allied Powers (SCAP—see poster, illustrated above), primarily, General Douglas MacArthur.

State Department chief of the Division of Far Eastern Affairs, John Carter Vincent, elucidated this policy—ever cognizant of the dangers of State Shinto—which nevertheless guaranteed the private practice of Shinto. Vincent’s’ views were quoted in this October,1945 telegram sent by the U.S. Secretary of State James Byrnes to General Douglas MacArthur, establishing basic U.S. policy goals towards Shintoism, while clarifying for MacArthur and his subordinates, the fundamental principles to attain those goal:

Shintoism, insofar as it is a religion of individual Japanese, is not to be interfered with. Shintoism, however, insofar as it is directed by the Japanese government, and as a measure enforced from above by the government, is to be done away with. People would not be taxed to support National Shinto and there will be no place for Shintoism in the schools. Shintoism as a state religion—National Shinto, that is—will go . . . Our policy on this goes beyond Shinto . . . The dissemination of Japanese militaristic and ultra-nationalistic ideology in any form will be completely suppressed. And the Japanese Government will be required to cease financial and other support of Shinto establishments.

Immediately thereafter directives were issued which terminated various educational platforms for the indoctrination of students into Shintoism, and fired their purveyors. Textbooks were re-written, and student education re-tooled to emphasize“the importance of challenging dogma, and of forming their own opinions.” As John Lewis observes, when Theodore Geisel—Dr. Seuss—visited Japan a mere 8-years after the Japanese surrender, and initiation of these educational reform programs, asking students to draw pictures of what they desired to be when they grew up,

The children drew hundreds of pictures of doctors, statesmen, teachers, nurses, and even wrestlers. Only one student wanted to be a soldier—and he wanted to be General MacArthur. The values of these children were already far different from those of their parents a decade earlier, when the Japanese dreamed of dying on the battlefield for an Emperor-god.

Sixty years later the lessons from the era of Japanese reconstruction have been ignored entirely following the US-led military interventions in Afghanistan, now under the post-Taliban Karzai regime, and Iraq, after the toppling of Saddam Hussein. Indeed the post-World War II paradigm of neutralizing Japan’s bellicose, religio-political creed of Shintoism, has been turned on its head with regard to Islam, and the theocratic Islamic legal code, Shari’a—imbued with jihad, and completely antithetical to modern human rights constructs.

The idea of religious law—the concept that law, as well as the other human relationships, must be ruled by religion—has become an essential part of the Islamic outlook. The same, incidentally, is true of politics, and even economics; it explains the recent attempt to hold an Islamic economic congress in Pakistan. Because they cannot face the problem, because they lack historical understanding of the formation of Mohammedan religious law, because they cannot make up their minds, any more than their predecessors could in the early Abbasid period [which began 750 C.E.], on what is legislation, the modernists cannot get away from a timid, halfhearted, and essentially self-contradictory position.

And Schacht concludes, “The real problem poses itself at the religious and not at the technically legal level.”

Perhaps the earliest, most disturbing sign of things going awry in Iraq’s march toward “freedom” was already evident in February 2004: the refusal of the interim Iraqi government to allow its ancient, historically oppressed (often brutally so) Jews to return in the wake of the 2003 liberation. Singling out the Jews was agreed upon absent any objection, except for the dissent of one lone Assyrian Christian representative in the interim government, who knew well what such bigotry foreshadowed: the oppression and resultant exodus of the Assyrian community – which has transpired.

Although much lionized, Iraq’s Grand Ayatollah Sistani remains an irredentist Shi’ite cleric who believes in najis—one of the more despicable belief systems in all of Islam—which imposes ugly restrictions on non-Muslim “infidels” due to their supposed physical and spiritual “impurity” [I have written about najis here, here, and here. Sistani also “wishes” for Shari’a to be implemented in Iraq. As a result, Sistani-supporting women in the Iraqi Parliament are putting forth his repressive agenda. (From the Times of London, “Iraq’s women of power who tolerate wife-beating and promote polygamy”):

As a devout Shia Muslim and one of eighty-nine women sitting in the new parliament, she knows what her first priority there is: to implement Islamic law. When Dr Ubaedey took her seat at last week’s [March, 2005] assembly opening, she found herself among an increasingly powerful group of religious women politicians who are seeking to repeal old laws giving women some of the same rights as men and replace them with Sharia, Islam’s divine law.

And when Sistani posted this fatwa about gays on his website (see below), he precipitated a surge in homophobic killings by state security services and Shi’ite religious militias.

Q: What is the judgment on sodomy and lesbianism?

A: “Forbidden. Those involved in the act should be punished. In fact, sodomites should be killed in the worst manner possible,” [emphasis added]

Conservative political scientist, and former University President John Agresto, wrote a poignant, and sympathetic, yet brutally honest memoir of the 9-months (September 2003 to June 2004) he spent in Iraq working as then Ambassador Paul Bremer’s senior advisor to the Iraqi Ministry of Higher Education and Scientific Research. Agresto, who had direct dealings with Sistani, has remained “more skeptical of the Ayatollah al-Sistani and his partisans than so many of my colleagues in the Coalition.” He highlights one astonishing fact about Sistani that has received scant attention, let alone comment, in light of legitimate concerns over undue Iranian influence on Iraqi affairs: