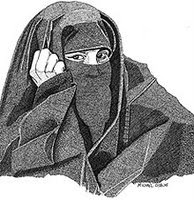 Stop the presses! UN Special Rapporteur on Freedom of Religion or Belief, Asma Jahangir, has discovered that life under Islamism in Gaza has resulted in cases of discrimination against women! Imagine the shock and the amazement of the UN envoy to learn that women feel coerced into covering up, and that Christians are facing a rising intolerance.

“Women seem to be in a particularly vulnerable situation and bear the brunt of religious zeal. I was informed about cases of honor killings carried out with impunity in the name of religion,”

You can kiss goodbye any kind of respect for human/civil rights when the true believers of Islam takeover, that’s what happens when sharia becomes the law of the land. With regards to the Christian community in Gaza and elsewhere in the PA administered areas, it’s not just rising intolerance that they are facing, it’s actually a full blown attempt to rid the Muslim areas of its second class Christian dhimmis.

Whether in Hamastan or in the PA areas of the WB, Islam is forcing its non-Muslim minority to either convert, cover up or leave. More here. *L* KGS