EXCLUSIVE: The Tundra Tabloids was forwarded an email earlier this afternoon, from someone who was worried about an op-ed that was recently published in a Finnish newspaper, the Koillis-Häme-lehti, (26.1.2008) in the city of Jämsä. After doing some detective work, the Tundra Tabloids has discovered that the anti-Semitic op-ed in question (pictured below), was indeed plagiarized.

That makes Urpo Manninen not only an anti-Semite, but also an anti-Semite who can’t even think up his own deluded, racist mumbo jumbo. 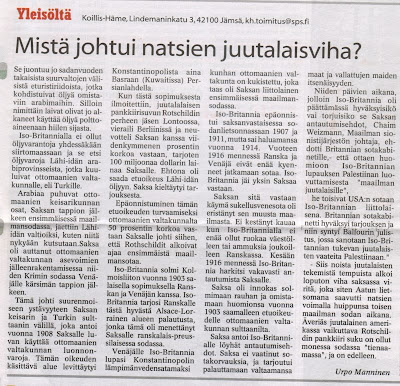 The anti-Semitic op-ed was taken almost word for word from this racist website, with only a few words changed, starting from the fourteenth paragraph. The National Alliance is a neo-Nazi website that most certainly hates Jews, and it’s highly outrageous that a newspaper would publish such a thing, let alone a plagiarized one! I’ll only include the last paragraph of the op-ed –that I translated– which deals exclusively with propagating the Rothschild Jewish conspiracy meme.

What Led to The Nazis’ Hatred of the Jews?
Urpo Manninen (actually by Benjamin Freedman, published on a neo-Nazi website)

During the days when Great Britain was deciding whether to accept or reject Germany’s surrender terms, Chaim Weizmann, the leader of the World Zionist Organization, proposed to the British War Cabinet that in consideration of the promise of Palestine to “the Jews of the world” by Great Britain, they would bring the USA into the war as Great Britain’s ally.

The British War Cabinet accepted the arrangement. The Balfour declaration, stating that Britain supported a Jewish claim to Palestine, was the result. So those tricks done by the Jews began the endless hate in Germany, which then Adolf spread with the help of the Nazis, reaching its zenith during the Second World War. The wealthy Jewish Rothschild banking family that is influential in America, has been “enriching itself ” in many wars, and will continue to do so.

Boy what a scandal, great going Koillis-Häme-lehti! Are you guys working on that retraction yet? *L* KGS