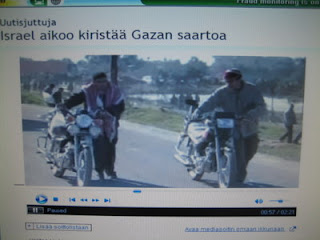 Hamas is sending a serious message to Israel, if the blockade of their terrorist regime is not soon lifted, they will over run the border with Israel in the same very same fashion as in Rafah.

The Eretz border crossing in northern Gaza is soon to be the next place of confrontation between Hamas and Israel. The Tundra Tabloids doubt that the terrorists will be able to break through as easily as they did in Rafah, solely because they won’t be allowed to undermine the structural integrity of the security fence at Ertez, like they did at Rafah for months on end.

Also noteworthy is the kinds of material goods the Palis are bringing back with them into Gaza. The supposedly dirt poor Gazans have enough money on hand to purchase high quality items like motorcycles. These two guys told Finnish journalist, Sanna Negus that they just paid 700 Euroes for each of the two bikes.