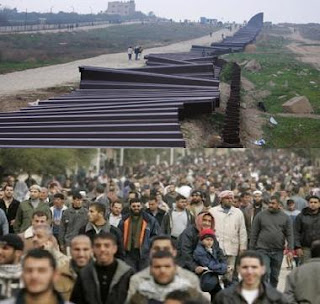 Hamas, which took control of the coastal territory last June after a stand-off with Fatah, has denied that its men set off the explosions that brought down as much as two-thirds of the 12-km wall in the early hours.

But a Hamas border guard interviewed by The Times at the border today admitted that the Islamist group was responsible and had been involved for months in slicing through the heavy metal wall using oxy-acetylene cutting torches.

That meant that when the explosive charges were set off in 17 different locations after midnight last night the 40ft wall came tumbling down, leaving it lying like a broken concertina down the middle of no-man’s land as an estimated 350,000 Gazans flooded into Egypt.

So there you have it, “the civilian population be damned”, the Hamas proves that it could NOT care less about the welfare of its people. But hey, the whole “humanitarian crisis” was staged from the very beginning, with pieces to the project placed well in advance of last weeks escalation of violence. This is the real reason for the whole farcical “humanitarian crisis”.

“It is likely that there is a significant number of terrorists who left Gaza today,” a defense official said. “They are probably returning now with money and weaponry.”

Now that most certainly will result in a future humanitarian crisis, and once again, of their very own making. More here. *L* KGS

Note: The international media has once again, EGG ALL OVER ITS FACE, for choosing to believe the Palestinian propaganda machine time and again. The farcical symbiosis between the pair of them would be funny indeed, if not for the human tragedy involved.

Update: Hamas staged some of the blackouts! Imagine the surprise of it all!

“On at least two occasions this week, Hamas staged scenes of darkness as part of its campaign to end the political and economic sanctions against the Gaza Strip, Palestinian journalists said Wednesday. In the first case, journalists who were invited to cover the Hamas government meeting were surprised to see Prime Minister Ismail Haniyeh and his ministers sitting around a table with burning candles.

“They had closed the curtains in the rooms to create the impression that Hamas leaders were also suffering as a result of the power stoppage,” one journalist told The Jerusalem Post. “It was obvious that the whole thing was staged.”

And will any of this leak out to the Finnish public? Well, it’s up to the gatekeepers in Finnish media isn’t it?