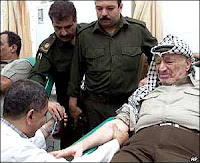 Lets face it, since Arafat died from the AIDS virus, it’s a good thing his diseased blood never made it to public circulation. That said, the recent revelation that Arafat never even donated any blood during the photo-op, shows just how much in bed the international media were with the late Palestinian terrorist dictator. Thanks to Atlas for the info on it.

“Bloody Lies! Noah Pollak – 01.18.2008 – 12:47 Joel Pollak (no relation) reports on his blog that Charles Enderlin, the France 2 television reporter implicated in the Mohammed al-Dura fabrication, admitted at a talk at Harvard last night that the famous scenes of Yasser Arafat donating blood after the 9/11 attacks were, like the footage of the IDF killing al-Dura, staged”:

Enderlin said the event had been staged for the media to counteract the embarrassing television images of Palestinians celebrating in the streets after the World Trade Center and Pentagon attacks. The blood donation story made headlines around the world. It was reported by esteemed news agencies like the BBC, and photographs of Arafat lying with an outstretched arm ran on many front pages. But the whole scene was staged, Enderlin said. Arafat didn’t like needles, and so the doctor put a needle near his arm and agitated a bag of blood. The reporters took the requisite photographs.

Pamela at Atlas ends the post saying: It’s all so disgusting. I couldn’t agree with her more. I also hold the majority of the international media responsible for pandering to the terrorists’ propaganda. On many occasions there is the turning the head on something that would really be newsworthy, but since it’s an atrocity that happens at the hands of their favorite pet cause, it’ll go unmentioned. More here. *L* KGS