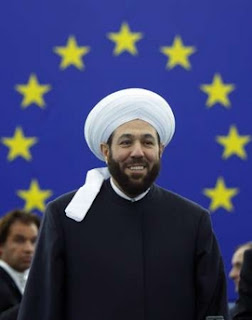 How wonderful the feeling of being in the EU, where EU dhimmicrats greet you with smiles while you kick them in the teeth.

Ahmad Badr Al-Din Hassoun, the Grand Mufti of Syria was invited by the European Parliament to speak on the subject of intercultural dialogue. This is the very same mufti who raised a ruckus last year about a Finnish author’s book, “The Home of the Dark Butterflies“.

The poor woman, Leena Lander, had to cut her book tour short after being told that Mr.Grand Mufti “all smile and guile” Al-Din Hassoun had condemned her book as being anti-Islamic. She did a very quick exit, stating that:

“her book was written in the nineties, and that had she known such a reaction would have been a possibility, she wouldn’t have tried to market her book in the region.”

So much for his pontifications on “intercultural dialogue“, he can’t even stomach a Finnish author’s book being translated into Arabic, let alone it being marketed in the Islamic Middle East. Mr.Grand Mufti went on to state that:

“really there are no separate cultures, there is but one single culture” in the world, namely “the culture of mankind”. Indeed, he said, “we, in our region, do not believe in a conflict between cultures”.

Wrap your brains around that one. What he actually means is, anything good that they (Muslims) can identify as being typically western, they (Muslims) themselves of course invented it first. In other words, Western culture is in fact Islamic culture. He goes on to elaborate even further:

“Does civilisation have a religion?”. His answer was that there is no Islamic, Christian or Jewish civilisation. “Religion gives civilisation its moral values but culture is something that we built”, he stressed, adding that religion “is the work of god” whereas civilisation is created by mankind. “We do not believe, in our region, in the multiplicity of religions“, said the Grand Mufti.

“Abraham, Moses, Jesus and Mohamed came with one single religion“. Therefore “there is no holy war, because a war can never be holy: it is peace that is holy.” Later he said it was wrong to use religion to justify killing.”

That is the point of his whole message. Islam was before everything, before revealed religion, before existing governmental institutions and before any development of cultures. Islam claims everything. We Christians and Jews supposedly owe everything to Islam, even our cultures.

He is an Islamist supremacist of the highest order, who does not actually believe in tolerance towards other non-Muslim religions, only in the supremacy of Islam, and should never have been invited to Europe, let alone to the EU parliament. The Grand Mufti was laying on the taqqiya real thick:

“Seeing the European Parliament as a model, (edit: for the rest of the world) he called on the EP “to help us build a universal parliament”. And since Damascus is this year the Cultural Capital of the Arab World, he asked the EP, as a practical gesture, to agree to hold “a meeting for cultures” in Damascus “to say that the world is at one”.

GLOBAL EURABIA! How wonderful would that be? Pax Islamica, the end of all wars with peace being ushered in from all corners of the globe! Can’t you just wait? Read what the chief dhimmi voice in the room had to say about the Grand Mufti’s closing statements:

European Parliament President Hans-Gert Pöttering said “peaceful coexistence between cultures and religions, both in the European Union and in relations with peoples in all parts of the world, in particular on the other side of the Mediterranean, in the Middle East, is both possible and essential”. He added “we must build an intellectual and cultural bridge across the Mediterranean, one founded on mutual enrichment and shared values“. He stressed that “Tolerance is central to intercultural dialogue. But tolerance does not mean indifference.

Tolerance means defending one’s views, hearing out others and respecting their convictions.” Lastly the president said “The fact that the Grand Mufti has been accompanied here today by senior religious leaders offers clear evidence of that successful coexistence”. Before starting his own speech, the Grand Mufti took the hand of Bishop Antoine Odo, President of the Chaldean Bishops of Syria, and together the two men faced the assembled MEPs, who responded with a warm round of applause.

Note: The Brussels Journal has published Fjordman’s article on it, Snaphanen’s posting is here, as well as a link to the EU’s official press release.

Note: This all goes hand in hand with the EU’s call for a Forum of Alliance of Civilizations. It’s all one big project, really.