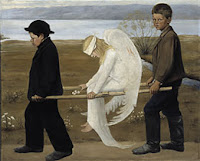 The blogger Tomashot, who operated the now defunct UUTISIA SUOMESTA website, a catalogue for various news stories and articles that dealt with immigration, Political Correctness and other Eurabia related issues, was dealt a serious blow by Finland’s judicial system today.

He was fined 825 € and ordered to close down his website. Over at Jussi Hallo-aho’s website, Scripta, I found out the following details:

(notice: The report I translated the text from is actually from Turkkilaista Tuumintaa, Halla-aho reports on it as well, and gives an account number to raise funds on Tomashot’s behalf.)

Tuusola circuit court found me guilty today of incitement against a national group. My verdict was a 825 € fine and all of my web pages were ordered to be closed down. Even though I insisted that my pages which were part of the factually based “News From Finland”, which publishes news concerning crimes committed by immigrants, and should be spared, but they were also judged to be closed down as well.

The verdict financially, was exceptionally harsh, nor do individuals with families have the money to spare for such a thing. According to the directive, I am to keep my web pages permanently closed. During the trial, I was left with the feeling that everything had already been judged before hand.

I believe that I explained my case and my position in a reasonable and acceptable manner, for which I was slapped with a verdict based on such a weak charge, just because I dared to be of a different opinion by bringing the stark realism of multicultualism for all to see.

But my case has now become just one of these “example cases” by which the voice of truth is silenced.

As far as I know, Tomashot’s webpages contained very little of his own material, it was more of a repository for news articles and blog posts from all over Finland —including the Tundra Tabloids— and from outside of Finland as well. According to the blogger –with whom I will shortly be in contact with– he was convicted for republishing snippets of posts and articles of stories the courts deemed unflattering towards minorities.

Update: The Baron uncovered this whole story, and is on top of things. Muzzled (Again) in Finland