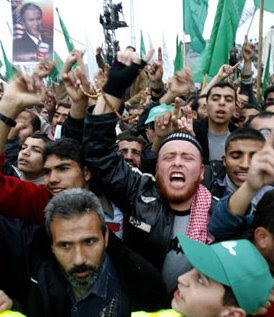 Something which the Palestinians in Hamastan would love to do as well.

Large parts of the West Bank city of Ramallah were sealed off for today’s visit. Heading into his talks with Palestinian President Mahmoud Abbas (mahk-MOOD’ ah-BAHS’), the president said he’d be pressing for answers on how Abbas plans to deal with Palestinian militants in the Gaza Strip.” More here.

I like how the AP provides the exact pronunciation for the name of the person responsible for providing funds to the Black September terrorist operation that murdered Israeli athletes in Munich. How thoughtful of them. Abbas set the tone straight away by insisting that “Jews living in E.Jerusalem is the greatest obstacle to peace.” What a lie, but told often enough it gathers weight.

“During their meeting, Abbas was expected to ask Bush to “order” Israel to halt construction in all settlements, including in east Jerusalem’s Jewish neighborhoods, PA officials said Wednesday. “Bush can and must order Israel to halt the construction in all settlements,” said one official. “Otherwise, efforts to bring about peace will never succeed. The settlements are the biggest obstacle to peace. We see no difference between a settlement in the West Bank and a Jewish settlement in Jerusalem.” More here.

I fully agree with the points that Primerprez raises in a post over at Primer-Connecticut, he drives through all the bull-sh*t rhetoric, zeroing in on the most crucial issues to the Israeli / Palestinian conflict:

Unfortunately, the president seems to have forgotten an agreement can only be reached when both parties are willing and there has been no indication on the part of the Palestinian Arabs that they will ever compromise. One each of the so-called “core issues,” their position remains exactly what it was in 1993 — the total rejection of any compromise — even on the phony “right-to-return” which isn’t even a legitimate issue and is in total conflict with the entire concept of a two-state solution.

The implication that the Palestinian Arabs do not know they have something to hope for is also patently absurd; they know the establishment of a Palestinian Arab state in most of the disputed territories only awaits the end of their refusal to compromise.

Ok, the actual title to the article really reads: “Bush Says He’ll Apply Pressure to Ensure Mideast Peace Accord”, but in essence, what he is really saying is that ‘more Israeli concessions equals more opportunities in reaching a settlement with an intransigent Palestinian entity’.

We have seen this time and time again, and it always fails, with the end result being an eruption of more violence being directed against Israel. Until the Palestinians are no longer a danger to themselves –a point widely overlooked by many– and have given up on a freater Palestine –another equally overlooked point by many– then the war will continue. More here.