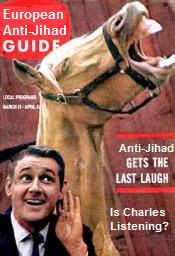 There is so much irony in that one, I just had to bring back MR.Ed and Wilbur for one more laugh. I don’t know how I missed it, perhaps I was being too hasty in getting a post uploaded. I am however grateful to the person who pointed it out to me.

“Did you notice what Expo said about LGF? Charles is using a source that hates LGF!”

Well I had to go back and reread the post by Fjordman, viewable at Gates of Vienna, and take a look at what the leftist site, Expo, —that Charles Johnson trusts so much— had to say about Little Green Footballs. And yes, CJ placed a lot of trust in Expo.

Expo is worried about the international connections of these sites: “The Swedish bloggers gain inspiration from their foreign counterparts. Little Green Footballs was among the first who, depending upon your viewpoint, warned against extreme Islamism or started spreading modern Islamophobia. Lately, however, the site’s criticism of Islam has turned into pure hatred of Muslims.

The journalist RJ Smith of Los Angeles Magazine for instance wrote in an article last year that Little Green Footballs is a ‘dysfunctional mix of beautiful photos that [blogger Charles] Johnson takes during his bicycling trips and constitutionally protected hate speech’ which ‘assumes all Muslims to be terrorists until proven otherwise.’

”Expo also states that Gates of Vienna is another leading and frequently cited English language blog, which just like LGF fronts conspiracy theories and prejudice against Islam.

Now that’s a mouthful of hay! So is there any wonder which of Expo’s claims CJ is chucking to the side? I personally believe that Expo magazine does not warrant any credibility whatsoever. But that’s just me. *L* KGS

Update: Vasarahammer notes in the comments that the Tundra Tabloids has made it into the pages of the anti-Fascist magazine Expo. Even Tundratabloids gets a mention in the latest issue of Expo Article in Expo. Tundra Tabloids – Finnish blogger who is behind the anti-islamic blog Tundra Tabloids.

Anti-Islamic? hmmmm. One does wonder if the due date for the pickled herring they have been eating, has long since expired. Something is rotten there and the folks at Expo can’t blame Denmark, nor the Tundra Tabloids for their stupidity. I might be skepical about Islam, but I’m not anti-Muslim. One only has to read my side bar to figure that one out.

Chalons also has something to say, so I’ll let her do it on the front page:

When one finds themselves aligned with self proclaimed anti-fascists who feel the need to wear black ski masks and issue overt call to destroy the culture, one should probably take pause and reflect upon the possibility that perhaps they have been duped. But human pride is the worst of sins and the toughest one to overcome. To expect an admission of error is probably asking a bit much at this point.

Hopefully, others will learn the wisdom of understanding what it is you are talking about launch off on a self righteous crusades based on abstract concepts. Moral values derived from the theoretical world must butt up against reality at some point. Moral relativism and abstract concepts may work very well on the set of “Star Trek: The Next Generation” . But out in the real world there is real evil, with real deceit, real deception, and real people who have no qualms about turning your strengths into weapons to be used against you. ‘The road to hell is paved with good intentions’ is an enduring quote for very good reason. Good people are overtimes unwitting agents of evil.

Orwell’s 1984 and Huxley’s Brave New World are two prescient works that really do need to be kept near the top of one’s mind. We see the concepts being played out today: Kill culture, kill heritage, do not teach history, kill righteous pride, invert morality, hijack the language, and suppress freedom of speech.

There’s a rough stretch of road up ahead. Best acknowledge it – for your own personal welfare. Wishful thinking is no foundation for security.