Life through a Burka – To promote an article in P Magazine about the daily life of women wearing burkas in Afghanistan, 127,000 of these printed bags were distributed at POS a few weeks before the edition was published. The black bags were designed to look like a traditional burka dress, so that when a P Magazine was dropped into it, the girl on the cover would appear to be wearing the burka. The same effect was achieved with many other magazines. 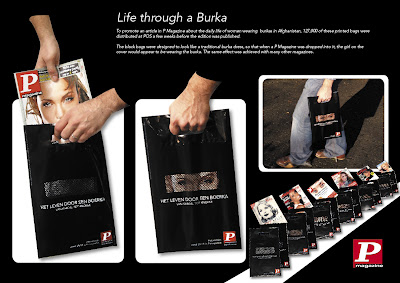 You would think that a fashion magazine would figure out that a tent parading as female clothing hasn’t anything to do with “fashion”. More here. *L* KGS

Esther at Islam in Europe states: The magazine also let its journalist walk the streets of Knokke, a coastal town, clad with a burka, gathering up reactions:

And later used it to advertise their reports, showing that what is common in one part of the word, is considered quite unusual in another: