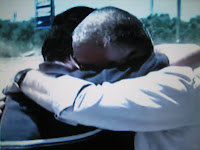 FACT: the overwhelming majority of Arabs residing in areas that could one day become a part of a Palestinian state, choose to remain in Israel. It isn’t hard to figure out why that would be, because the modern Jewish state has many attractive features (decency, freedom, rule of law, good economy etc.) to offer, compared to the mayhem that awaits the potential citizen of a future Palestinian state.

To further underline the point of why the majority of Arabs would choose to live in Israel, last year Maulana Jameel Ahmed Ilyasi, secretary-general of the All-India Association of Imams and Mosques visited Israel for the first time and stated that:

“My impression was initially that the Israelis are certainly dominating Muslims out here. Once I came here, that impression completely changed,” Ilaysi said. “I saw the reality on the ground, the mutual respect Israeli Arabs and Israeli Jews have for each other. Constant conflict is not the reality here,” Ilaysi said, describing his visit to the Israeli-Arab village of Abu Gosh, frequented by Israeli Jews.”

Ilyasi went on further to state that “the time had come for Pakistan to establish official relations with Israel. “This is the right thing to do…” That is the true reality on the ground, and though problems do exist, the fact that they take place within a highly functioning liberal, pluralistic democracy, means that these problems can actually be addressed. Here is a snippet from the Daniel Pipes article:

Palestinians have a hidden history of appreciating Israel that contrasts with their better-known narrative of vilification and irredentism.

The former has been particularly evident of late, especially since Israel’s prime minister, Ehud Olmert, floated a trial balloon in October about transferring some Arab-dominated areas of eastern Jerusalem to the Palestinian Authority. As he rhetorically asked about Israeli actions in 1967, “Was it necessary to annex the Shuafat refugee camp, al-Sawahra, Walajeh, and other villages, and then to state that these are part of Jerusalem? One can ask, I admit, some legitimate questions about this.”

In one swoop, this statement transformed pro-Israel statements by Palestinians (for a sampling, see my 2005 article, “The Hell of Israel Is Better than the Paradise of Arafat“) from the mostly theoretical into the active and political.

Indeed, Olmert’s musings prompted some belligerent responses. As the title of a Globe and Mail news item puts it, “Some Palestinians prefer life in Israel: In East Jerusalem, residents say they would fight a handover to Abbas regime.” The article offers the example of Nabil Gheit, who, with two stints in Israeli prisons and posters of “the martyr Saddam Hussein” over the cash register in his store, would be expected to cheer the prospect of parts of eastern Jerusalem coming under PA control.