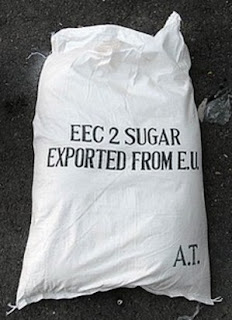 Unbelievable! You can place this incident in the very same category with the Egyptians assisting the smuggling of arms into Gaza, while Israel’s Foreign Minister Tzipi Livni withheld any evidence about it. This is pure buffoonery on the part of the Israelis.

This is something that should be shouted from the roof tops. This is akin to the Palistinians using ambulances to ferry its terrorists from one place to another in its dirty war against Israel, or the disguising of women to look pregnant but carrying suicide belts instead.

“The IDF and Shin Bet uncovered 6.5 tons of potassium nitrate hidden in sacks that were disguised as aid from the European Union, the army announced on Saturday. Security forces discovered the stash in the cargo of a Palestinian truck at a West Bank checkpoint earlier in December.

According to the IDF, the material, hidden in sugar sacks, was planned to be used by terrorists in the Gaza Strip. Potassium Nitrate is a banned substance in the Gaza Strip and the Judea and Samaria region due to its use by terrorists for the manufacturing of explosives and Kassam rockets,” the IDF spokesperson wrote in a statement.

This is another example of how the terror organizations exploit the humanitarian aid that is delivered to the Palestinian population in the Gaza Strip with Israel’s approval,” the statement read.”

This is a story that clearly got away, with the majority of the international media no longer being interested in it anymore. Too bad, but its here for the viewing anyway and part of the public record. More here. *L* KGS

Update: The Helsingin Sanomat ran the story here. So I must stand corrected at least where the Finnish media is concerned.