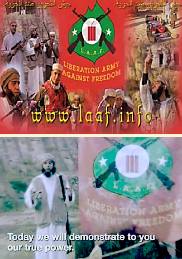 A real fire cracker of a video! Funny funny funny! The Baron has it all here. Too bad it’s not available on YouTube, I would have uploaded it here.

“‘Terrorist’ firework ads spark row. Dutch government firework safety ads featuring a spoof Islamist terrorist group have been criticised as insensitive and depicting a negative stereotype of the Muslim community. The online ads, made for the Dutch government’s consumer safety institute, have been made to look like a video message filmed by an Islamist military organisation called the Liberation Army Against Freedom. Featuring a group led by an Osama bin Laden lookalike figure at their camp, the viral ads are dubbed into Iraqi-accented Arabic and have versions with subtitles in Dutch and English.”

We need something similar here in Finland as well, New Years is around the corner, and Finns love their fireworks! Hats off, er, should I say turbans off to these guys. *L* KGS

Update: Esther at Islam in Europe offers valuable insight into the reasoning behind the Guardian’s article.

“Apparently, the Guardian is trying to drum up a controversy, but since even the Muslim Council of Britain finds them educational and funny, had to rely on one British-Iraqi advertiser. In other words, the Guardian is doing here exactly what it’s supposedly warning against. By reporting a non-story it’s “depicting a negative stereotype of the Muslim community”, and therefore showing itself to be quite ‘Islamophobic’ in its own right.”