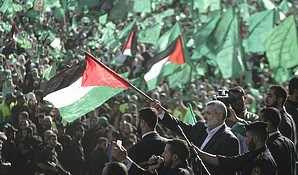 The pragmatism of Hamas in full view, flapping in the wind like their green flags.

“Jews…we have already dug your graves,” exclaimed Masri. Hamas Prime Minister Ismail Haniyeh assured the crowd that Hamas and the Palestinians would not recognize Israel…

“Whoever insists on not recognizing Israel, clings to Allah and doesn’t surrender in the face of the Israeli and US blockade, his popularity grows despite American hostility,”

That’s it in a nutshell, no need to go any further in trying to figure them out, for there is nothing else to be found. The tribal warlords have spoken, time and again, it’s just that our western leaders (and some Israelis) keep refusing to believe the very consistent, and determined message spoken in the Palestinian camp.

To quote Dr.Daniel Pipes, who has stated on more than one occasion, “Arab recognition of Israel’s Jewish nature must have top diplomatic priority. Until the Palestinians formally accept Zionism, then follow up by ceasing all their various strategies to eliminate Israel, negotiations should be halted and not restarted. Until then, there is nothing to talk about.”

Exactly Daniel, if only more western leaders would have the common sense to listen to your astute advice. We would see a more dramatic change for the better, as less and less concern by the West for a “magical solution”, would lead to more and more Palestinians challenging the status quo within their own leadership. The more we placate their every whine, the more they exact in blood from both themeselves and the Jewish state. More here. *L* KGS