Since the Tundra Tabloids couldn’t find a pic of Fattah’s Omar Al-Ghoul, I thought I’d treat everyone to another ghoul that I grew up watching on late night TV. Cleveland’s very own King of B-horror movies The Ghoul!

“Omar Al-Ghoul is an adviser to Salaam Fayad, the Palestinian Authority prime minister appointed to lead the West Bank government after Hamas took control of Gaza. Al-Ghoul is considered a harsh critic of Hamas and has a regular newspaper column in which he frequently attacks the Islamic movement.
Al-Ghoul arrived in Gaza from the West Bank on Thursday to attend the funeral of his mother-in law. Around 4 a.m. Friday, armed gunmen in civilian clothes burst into his Gaza home, turning it upside down and seizing Al-Ghoul, his relatives reported. There was no claim of responsibility.”

Now this is something I wasn’t familiar with, the word “ghoul” is Arabic and comes from the word “ghul”.

Arabic Ghul, in popular legend, demonic being believed to inhabit burial grounds and other deserted places. In ancient Arabic folklore, ghuls belonged to a diabolic class of jinn (spirits) and were said to be the offspring of Iblis, the Muslim prince of darkness. They were capable of constantly changing form, but their presence was always recognizable by their unalterable sign: ass’s…

There you have it, ghouls are demons recognizable by their unalterable sign: ass’s. It pretty much sums it up for me. 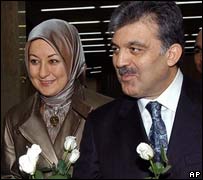 Here is another picture, this time it’s a couple of “happy ghouls”, Turkey’s Islamist president, Abdullah Gul, and his scarved Islamist wife Hayrunisa.

So both Omar and Abdullah have something in common, not only do they share the same Arabic related name of “ghul”, they are also involved in governments with Islamists lurking in ever corner. How neat is that?! More here. *L* KGS

Update: Shual reminds: You forgot Adnan Ghoul, the pioneer of Qassams, and martyr.

So there are Ghouls represented in both terrorist camps of Hamas and Fattah. For those who don’t know, Adnan Al-Ghoul was a Hamas terrorist dispatched from the land of the living by an Israeli targeted strike, you know, the kind of attack that tries to limit human casualties, unlike Palestinian terrorists who aim to murder as many as possible.