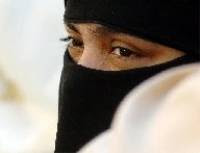 Though I disagree with some of her analysis, Shadow Communities Secretary, Baroness Warsi of Dewsbury, is most certainly stepping up to the plate by calling for the end to forced marriages and recognizing that schools have a right to enforce their own dress codes.

“VEIL wearing, forced marriages and the low status of women in some Muslim communities are cultural, not religious, issues – and fair targets for criticism, according to one of Britain’s most senior Muslim politicians. In an unprecedented attack on the way cultural practices have been allowed to become blurred with essential religious observances, Yorkshire peer Baroness Warsi last night called on communities to question non-religious rites and rituals that did little more than create and exacerbate divisions.”
I disagree however that the practices are not Islam related, there is ample evidence within the Qur’an itself, that sets the tone for the adaptation and implementation of such “cultural practices” within Islamic communities. I recommend reading the Middle East’s Tribal DNA, A Case Study for better understanding of what comes from where. Baroness goes on to further add that:
“Unless a “vital distinction” was made between cultural and religious practices, there would simply be more “separation as devout young people think it’s their religious duty to cut themselves off from wider society”. Speaking to a conference on diversity in London yesterday, Baroness Warsi said: “We can and must be utterly intolerant of cultural arguments that try to divide our country and our communities”.
She is of course entirely correct that, cultural practices which are in conflict with our present day, modern societal views need to be discussed, debated and criticized and above all, not tolerated. But for her own reasons, she chooses to drive a wedge between these detrimental cultural practices and the religion that spawns and promotes them.
The Baroness Warsi is attempting to draw a distinction between the two, Islam and its culture, in order to be perceived as being not against the Islamic faith she adheres to. For her, it’s not Islam at fault, but a unhealthy immigrant culture that has somehow been manufactured, developed outside the constraints of Islam itself.
As I see it, both are intricately intertwined, with Islamic religious interpretations affording the needed validation to cultural practices, that are deemed necessary in order for the religious views to maintain any sense of validity. Both the culture and the Islamic religion are one and the same. The degree of change in the Muslim immigrants’ cultural practices depends upon the degree of emphasis on what portions of the Qur’an, Hadiths and other holy texts are literally followed.
While it’s also true that the Arab Bedouin culture greatly influenced Islam in its conception, the religion itself since that time, and throughout its history, has acted as vehicle to disseminate the Arab imperialist culture, that embodies many of the negative attributes coming into conflict with our modern day, liberal democratic society.
So in my opinion, both the religion and the culture it created and propagates, are well within the bounds of criticism and debate. While the individual is rightfully set on equal par with all others, not all cultures and religions are equal. Though an individual is born into both systems, and will become by default a member of either or both, that in itself does restrict the individual from being criticized of the views he or she holds.
Religion, as with culture are obtained from birth, but since it has nothing to do with one’s genetic make-up, both religion and culture are something that most individuals will experience in flux, especially if the individual or group of individuals move to different areas and makes contact with other people holding different views.
So since all ideas, cultures and religious beliefs are subjected to change naturally through individual and group experiences, they are already, by default, a part of the realm of debate and criticism. What is in question here then, is a portion of society demanding/claiming that they are not a part of what develops naturally on an individual basis. What they are telling the rest of society is that, both their culture and belief system are above all others.
That kind of thinking needs to be confronted and rejected at any level, through open debate and public criticism. Baroness Warsi should be commended for her stance but she is only half right, the other half, the religious element, needs to be drawn into the debate as well. More here. *L* KGS
Via Esther, Islam in Europe