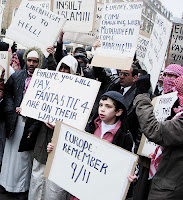 I just commented in the previous post below, “we must never allow the religion of Islam to secure a place of dominance within our western societies, which shields it from both critique and debate.”

I also included the words of a someone who also astutely hit the nail on the Islamist head:

“In the same way that people have denied the existence of anti-Semitism and pointed the finger at anyone who tries to warn of its dangers, so now they are criticising a Muslim (Bassam Tibi) for trying to open people’s eyes to the growing threat of the Islamisation of Europe and accusing him and others who express their concern of inciting Islamophobia.”

Now we have “the declaration of grievances” from the intolerant “democracyophobes” who assembled in Istanbul, who want to further cloud the issues of the day, by crying bigotry and Islamophobia against those who reject the intolerance of Islam and its Islamist agenda.

“Islamophobia should be accepted as a crime, just like anti-semitism”. So read the final statement of the The International Conference on Islamophobia”, organized by the Union of NGOs of the Islamic World (UNIW), which ended in Istanbul yesterday. As Anadolu news agency reported, the statement also said that national and international law mechanisms should enact legislations and take decisions against Islamophobia.

The fight against Islamophobia should be carried out politically, legally and economically both in the national and international arena and in a systematical and strategical way, the statement said. “The fight against Islamophobia should be a basic duty for everybody, every institution and every government,” the statement added.

Of all the nerve. The Baron over at Gates of Vienna comments succinctly about the conference on “Islamophobia”: “The infidels are being softened up.” You bet they are, and we haven’t seen the end of it. The way dhimmifide Europe has been reacting in the face of Islamic intolerance over the years (read Eurabia) can only mean that more groveling and appeasement is in the making. *L* KGS

Note: The Sheik has more.