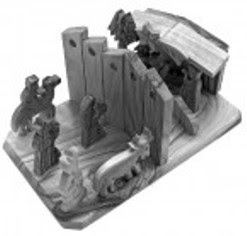 It’s that time of the year again. For most Christians it’s a time for celebrating the birth of their Lord and saviour, and sharing the “spirit of Christmas”, its message of goodwill and peace towards all mankind. For other Christians –those naive enough to be taken in by Palestinian Arab propaganda– it’s an opportune time to stick it to Israel.

“A British charity is giving the traditional nativity scene a political twist this year by dividing it with a wall symbolizing Israel’s controversial security barrier.

The Amos Trust, a Christian group that works with needy communities around the world, is selling what it calls a nativity set with a difference — one where “the wise men won’t get to the stable.”

Organizers say the purpose of the sets — made by Palestinian carpenters with olive wood from Bethlehem — is to draw attention to the security measures put in place by the Israeli government.”

Fortunately, Israel has the solid backing of Christians who are not taken in by the lies of the Muslim Arabs and their supporters. These Christians are knowledgeable about the traditional violent nature of Islam towards Christianity and Judaism (where Islam has the upper hand), and can see through the rhetoric and the propaganda.

Thankfully, most of the world’s Christians are more satisfied with Jews supervising their holy places than with Islam. These Christians see in Judaism a kindred spirit, something that the foreign religion of Islam will never achieve. Thankfully. More here. *L* KGS

Note: The positive side being, that this will serve to highlight what is ACTUALLY HAPPENING THERE. The CNS report details: “Some scholars attribute the shrinking Christian population to harassment and intimidation by Islamists, however.

Two pro-Israel Christian groups criticized the nativity sets.”We are saddened by attempts to make one-sided political capital out of the Bethlehem story,” Geoffrey Smith, director of the U.K. branch of Christian Friends of Israel, said Wednesday.”

Nobody wants a security barrier but so long as terrorists continue to threaten the lives of Jews and of Arabs in Israel, the people there have to defend themselves in ways that will stop the bombers.”

UPDATE: My buddy Pamela at Atlas Shrugs links to this post! Thanks Pamela! I can’t help but publish some of the comments left at Atlas, they’re real beauts!

Harcourt Fenton:”If you must have a “walled nativity” scene that grossly distorts the purpose of Israel’s protective barrier against homocidal attacks on civilian innocents, perhaps you should have the 3 wise men wearing bomb belts to clarify the reality of the situation and have them blow up Jesus the Jew, Mary the Jew and Joseph the Jew when the wall is removed.”

Hope : “I’m confused about who is supposed to be on which side of the wall…cause Jews are NOT allowed in Bethlehem, so I guess that would put Miryam, Yoseph, and Yeshua on the “Israel side of the wall.”