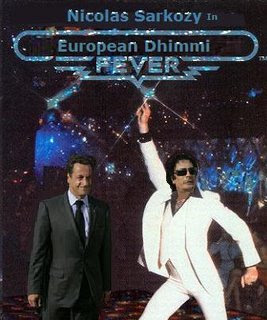 The Arabs just can’t get enough of it. During the EU-African summit held in Lisbon Portugal, Ghana’s President John Kuofor, said that:

“The real significance of the Africa-EU summit must therefore be to lay the foundations of a new partnership based on mutual respect and a genuine commitment to pursue the mutual interests of our two continents,”

To bad that warm and fuzzy feeling exhibited at the Eurabian summit wasn’t present during the French president’s visit to the Algerian capital. Nikolas Sarkozy was greeted instead with anti-Semitic slurs.

Via Atlas Shrugs, Pamela has the following:

“French President Nicolas Sarkozy’s first official visit to Algeria this week was overshadowed after he became the target of antisemitic insults. Only a few days prior to the visit, Algerian minister Mohamed Cherif Abbés claimed in the El–Khabar newspaper that Mr Sarkozy had been elected through the manoeuvres of “the Jewish lobby” and made reference to the president’s Jewish origins.

The Algerian authorities refused to apologise for the assault, and Socialist leaders Jean-Christophe Cambadélis and Pierre Moscovici pleaded for a rescheduling of the trip, stating the attack was “intolerable”.

That’s not all, Sarkozy had to get “cozy” with the “man in white” during the EU-African summit, shaking his hand and being all smiles, while Gaddafi spoke in coded terms that could be considered as supporting terrorism. The son of Gaddafi was also at the summit, trying his best to drum up some business with the French.

That is the real purpose of any summit or conference for the Eurabists. Hardly any hope is held for the Muslim section of the African continent, that it will implement reforms and begin abiding to human rights charters etc..

This is all about business, nothing more and nothing less. The African Muslims view any money flowing their way as a sort of “jizya tax“, that the Europeans are to dutifully pay, and the Eurabists are willing to pay in order to exact some kind of vague assurances. It’s the very same ploy the Iranians have been using with the Europeans for the past 5 years. *L* KGS

Note: To show just how appeasing these polticians are, even Sarkozy can lower himself, by equating anti-Semitism with the boogey man of “Islamophobia”. The former being a real and ever present reality, with the latter being a means to silence criticism of violent Islam.