It’s all because of this little fuzzy guy. British teacher Gillian Gibbons had her sentence reduced in a Sudanese court, from six months and a whipping, to fifteen days in jail and a deportation. The poor woman’s crime involved the allowing of a child she was teaching, to name a teddy bear Mohamed.

“The teacher, Gillian Gibbons, “was in tears” when she testified in court Thursday, a member of her defense team, Abdel-Khaliq Abdallah, told The Associated Press.

“She said that she never wanted to insult Islam” by allowing the children to name the stuffed toy Muhammad, a common name among Muslim men, the lawyer said, speaking outside the courtroom. Media were barred from the chamber.

Gibbons, 54, was found guilty of “insulting the faith of Muslims” and sentenced to 15 days in jail, followed by deportation, said Ali Mohammed Ajab, a human rights lawyer on the defense team. The charge is a lesser offense in the article of the criminal code under which she was tried, which includes several possible charges.”

The Muslim outrage that ensued only goes to show what fools the adherents to that faith make both of themselves and their religion. Let’s face it, those Muslims who react in such a fashion, are those Muslims who can be interpreted as worshipping their prophet as a god. 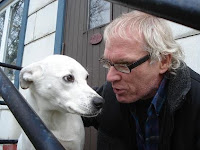 I would assume then that Lars Vilks’ naming of his dog Mohamed, would then be as big of a “no no”, as the situation this hapless teacher finds herself in.

Situated on the right is a picture of the man and his dog, Lars Vilks and Mohamed. More here. *L* KGS