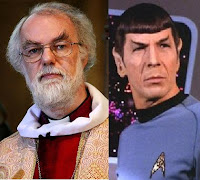 And who is leading the attack against this latest Islamic outrage? Well it’s none other than the “Spock” eyebrowed promoter of anti-Israeli rhetoric, Archbishop Rowan Williams himself.

R.Williams: “This case should have required only simple common sense to resolve. It is unfortunate that the Sudanese authorities were found wanting in this most basic of qualities. “Gillian should never have been arrested, let alone charged and convicted of committing a crime. We hope that Gillian will be able to return home without much further delay.”

This Archbishop however, was the same guy who charged last year that Israel was driving Arab Christians from the PA and elsewhere, though the assertion is a complete lie, which is something Spock would never do. Perhaps the Archbishop should watch old re-runs of Star Trek to get his moral compass running again.

“I would like to know how much it matters to the Israeli Government to have Christian communities in the Holy Land. Are they an embarrassment or are they part of a solution? That’s a question.”

This tired and very worn out false charge by the Archbishop has been thoroughly debunked by Professor Justus Reid Weiner, from the JCPA in his study titled “Human rights of Christians in Palestinian. While I applaud the Archbishop’s stand in the Gillian Gibbons case, it’s too bad that his powers of logic and reasoning doesn’t apply to the situation that befalls the Arab Christians living (not for long) within the Arab/Muslim Middle East.

It is Muslim supremacy that is the problem, in both the Sudan and throughout the Palestinian Authority administered areas. Let’s hope that the Archbishop is now smart enough to understand things as they are, and stop scapegoating Israel for crimes that are actually being committed by Islamic supremacists. More here. *L* KGS

From the comment section. Vasarahammer asks the following question: “What would Mr. Spock say after he did a Vulcan mindmeld to some of those screaming for blood in Sudan?”