Tundraman is back with an excellent example of how the media here in Finland typically cast the Palestinians in a better light than the Israelis. This has been noticed and mentioned on the Tundra Tabloids on countless occasions, so here’s just one more prime example of how Finnish state TV YLE does it, this time at the hand of Sanna Negus in yesterday’s 20:30 report. *L* KGS

Tundraman explains: Sanna Negus reported in YLE TV1’s main news (video in Finnish here 14 min. into the program)on what “ordinary Israelis and Palestinians” think of Annapolis: She interviewed two anonymous Israeli men on the street of Jerusalem, one of them saying that Olmert is weak and that no good will result from the meeting:

“Prime Minister Olmert is not strong so he’s trying to save his skin. I’m not able to believe that anything postive will come from the conference.” 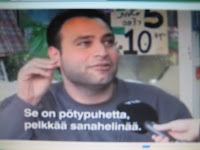 The other one saying that it is all only talk and no business:

Then she interviewed two Palestinians. The names of both appeared on the screen, one of them (the woman) also had a title (“former Minister of Women’s Affairs”) and they clearly represented the Palestinians more officially. 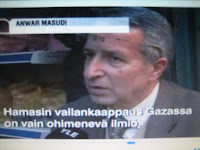 Amal Siyam: “we need to be united so our position would be stronger. If the president has support in the negotiations, he will be starting from a better position.”

Anwar Masudi: Hamas’ takeover of Gaza is a passing phenomenon. The legal government exists and will remain. It will project itself as strong in the negotiations.”

Then there was a third, anonymous Palestinian young woman interviewed on the street, saying that she “hoped” for peace: 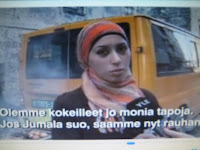 “We have exprienced so many killings. God willing, we will now have peace.”

So, (a) there were 3 palestinians and 2 Israelis interviewed, (b), 2 of the 3 Palestinians but none of the Israelis had names and represented the official “establishment”, and (c) the side appearing to favoring women and peace was clearly – not the Israelis but the Palestinians…

Note: Al Avai adds: The message is that the Israelis are cynical, but the Palestinians sincere and hopeful. So if there is a failure, the fault will be ….(guess).

More on Sanna Negus’ reporting in the Finnish media: