They’re all buddies I tell ya! This is the answer to the recent summit in Turkey attended by Israel’s president, President Shimon Peres. A love-fest of hate and venom, makes you want to puke your guts out.

A nice comfortable setting for the attendees, I’m sure that George Galloway and Desmond Tutu had quite a time rubbing elbows with all the guests who were yelling Allah u Aqbar and shouting for the destruction of the “Zionist state”. Surely Desmond Tutu will be put on the EU’s list of undesirables for attending the hate-fest…..right?

The MEMRI blog has more on the meeting of openly racist hatemongers. More here. *L* KGS

Note: I am puzzled by some people who think they have to doubt groups like the Vlaams Belang who are very philo-Semitic and openly pro-Israel. 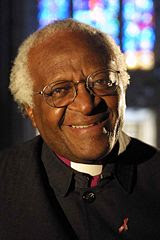 The Most UN-Reverend Dr Desmond Tutu, a disgrace to the faith he claims to represent.