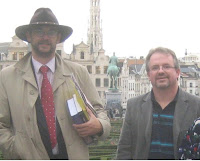 Paul Belien, from the prestigious online journal, Brussels Journal, writes an illuminating article about two different events taking place at the same time in the same building. Both events couldn’t have been more distant from the other in outlook and intent. Paul Belien:

“Last Thursday, a group of 80 people from 15 European countries, plus Israel, Canada and the United States, convened in a conference room on the seventh floor of the European Parliament building in Brussels for a “counterjihad” meeting.

They listened to speakers such as the Egyptian-born scholar Bat Ye’or, author of the book “Eurabia,” who explained how the European Union (EU) has become a vehicle for the Islamization of Europe and how the EU has promoted “a massive Muslim immigration […] hoping that the Euro-Arab symbiosis through economic development, soft diplomacy and multiculturalism would guarantee [Europe] peace, markets and oil.”

“While the delegates at the counterjihad meeting, who had been invited to the European Parliament by one of Europe’s so-called far-right parties, discussed strategies to counter the spread of Islamism, EU bureaucrats convened in a meeting room two floors below. On the fifth floor of the parliament building, they discussed the “harmonization” of self-defense legislation in the 27 EU member states. This means that, if the EU gets its way, the citizens of all member states will soon be submitted to Belgium’s strict rules and that pepper sprays will be banned everywhere.”