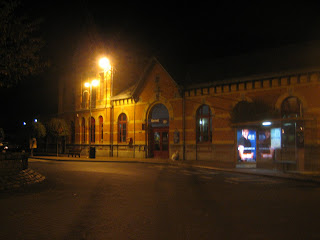 Upon conclusion of the Counterjihad conference in Brussels, it was time to wrap things up and head back home to Finland. Though the time went quickly, there were plenty of opportunities to engage in discussions with participants to the conference and the locals in the area.

On the first day in Brussels (Wednesday), I ran into a couple of gentlemen who were passing out pamphlets in the heart of Brussels and engaging people in discussions. These two men were expat Iranians that were trying to draw the peoples attention to the plight of Iranians suffering under the current dictatorial regime of the mullahs. 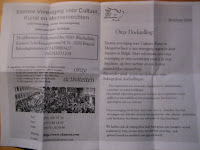 They both carried binders full of pictures depicting the hanging or stoning of people that were convicted of the “crimes” of adultery and homosexuality, as well as listing all the other various crimes against humanity the Iranian government has committed during its 28 year reign of terror.

I promised the two men that I would publicize their endeavors at the Tundra Tabloids as we exchanged our contact information. Both of the men were very courageous and determined to do whatever they could to enlighten anyone that took the time to talk with them. Their online website can be found here.

“Public executions in Iran continue. The number of executions since the beginning of 2007 has gone beyond 250 which far exceeds the total number throughout 2006. The political motives of the mullahs’ regime for such public hangings and EU’s policy of closing their eyes to such atrocities and imposing restrictions on the Iranian opposition will be discussed in a press conference on Wednesday 19 September in Brussels.”

On Saturday morning as I arrived at the nearby train station (pictured above), I found to my dismay that the train I had been commuting with between the Brussels Noord station and Genval, was not operating on the regular time schedule. In other words, since no taxis could be found that early in the morning in the small town I was staying, I was stuck without a lift.

I would have most likely missed my train connection to Amsterdam, if not for a man delivering news papers to a closed shop across the street from where I was standing. I asked him if he spoke English and he said yes, told him my predicament and he said “toss your stuff in the side of the truck and I’ll give you a ride, it’s on my way”.

He didn’t speak English fluently, but we were able to talk somewhat. After delivering the last of his papers to four more shops, we were finally on our way back to Brussels. I found out that he was an Albanian Kosovar and he found out that I was from Finland. He has worked in almost all of the major cities in Europe as a truck driver, and sends most of what he earns to his wife and three children in Kosovo.

Upon hearing that I was from Finland he expressed his admiration for Finland’s former president, Martti Ahtisaari, –who is currently trying to get Kosovo to become an independent state– and spoke about all the problems Muslims are currently facing around the world. What I find interesting is his focus on the areas of conflict –Afghanistan, Iraq, Palestine– as examples of victimization of Muslims by the West.

Here is a guy that works rather freely in Europe, very friendly and from a supposed “moderate” Muslim region inside Europe, but he chooses to identify the West as the oppressors…. not Iran, the Saudis and the former Iraqi regime as the worst violators of Muslim human/civil rights.

I of course didn’t get into a deeper discussion with him due to language and the fact that I was very much dependent upon his “goodwill” in getting me to Brussels. It does however, cause me to think back to the first encounter a few day earlier, the two men who were disseminating material about the dictatorial mullocracy of Iran. These two Muslim men knew very well what brutality and victimization was, and in their opinion, it wasn’t coming from the West, but from the very heart of the Islamic world itself.

The two separate encounters highlights the Wests’ own policies vis-a-vis the Islamic world. When it comes to safeguarding ones own self interests –like my ride to Brussels in the Kosovars’ cab– issues that need to be addressed often go unmentioned. I can’t be too hard on myself though, I didn’t have very much room to maneuver, unlike the 27 governments of the European Union. *L* KGS