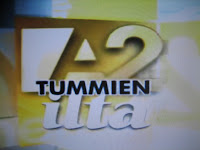 Finland’s YLE television aired its Ajankohtainen Kakkonen program “TUMMIEN ILTA” last night, in which guests representing Finland’s minorities were invited to talk about their experiences of discrimination and prejudice at the hands of the majority in Finnish society.

The main focus of the program was Finland’s Romani minority (Gypsies) hence the labeling of the program “Darks’ evening”, the literal translation of “tumma” is of course dark, but the word itself doesn’t have a negative connotation.

But they were not the only minority present, there were also a Finnish Muslim, Atik Ismail, from the Tatar community, a very modernist, secular sect of Muslims that have lived in Finland for over a hundred years. Ismail mentioned in a video trailer for the program that: “he was a Muslim who fears Islamist extremism.

But Ismail was not the only Muslim invited, 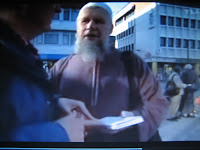 but also, (you guessed it) Abdullah Tammi, Finland’s most famous “revert” to Islam. Tammi was first shown in a short video proselytizing in the streets of Helsinki, before being introduced onto the set.

The man is an enigma wrapped in a riddle. Abdullah Tammi ended up contradicting himself throughout the entire evening. Being called out over his statements about sharia being “great”, he was questioned over the beating and subjugation of women.

Tammi of course defends Islam’s prophet Mohamed, “he never meant for women to be actually beaten” but then feigned ignorance over what sharia actually stood for, when it was proven that elsewhere these atrocities regularly occur. The question remains, how this nutcase can explain what sharia isn’t, when he admits that he doesn’t know what sharia is?

The introduction to the program contains this one liner:

“Mikä on Suomen linja vähemmistöihin, kun niiden tavat törmäävät valtaväestön normeihin? / What is Finnish policy towards minorities, when their traditions collide with the norms of larger society?

That collision was graphically shown upon conclusion of the program, when one of the female hosts went around shaking all the hands of the guests participating in the program. Abdullah Tammi refused to shake her hand. Video viewable here. *L* KGS