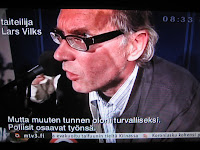 Finnish MTV3 reports that Lars Vilks refuses to hide. Last night in Stockholm, and under heavy police protection, Lars Vilks, the artist that pictured Islam’s prophet Mohamed as a round-a-bout dog, showed his art work to about a hundred people gathered at the event.

MTV3 reports that “Muslim extremists have called for the boycott of over a hundred Swedish businesses, including SAS, Arla, Volvo and Ikea.” “Vilks showed the Mohamed characterised as a dog pictures to former Muslims and the Stockholm Humanist Society who arranged the event.”

When asked how he felt about the threats against his life, Vilks mentioned in the televised news footage that he was serious about the threats, and that it has made his life more difficult. The text in Finnish reads: “But otherwise I feel safe. The police know their work.”