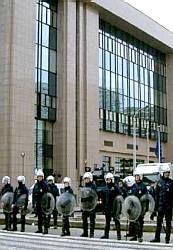 The Stop the Islamization of Europe Demonstration in Brussels today has been disrupted by the Belgian police, with arrests being made of some of the leaders of the protest.

The Gates of Vienna has the FULL STORY here. The Baron has been following the developments from the git-go. I defer to him.

Protestors against Islamization arrested in Belgium.

Belgian police have arrested tens of demonstrators against the Islamization of Europe in Brussels. Belgian extreme right-wing Vlaams Belang party leadership were among those who were arrested. Another of those arrested, was Frank Vanhecke, a member of the EU parliament.

According to the news agency AFP, a number of demonstrators were carrying national symbols. A portion of the police had prepared themselves in full riot gear.

The main planner behind the demonstration, the founder of the anti-Islamization party, Anders Gravers said that he was shocked by the arrests, because he believed that demonstrating was a part of democracy. He threatened last week, that the demonstration would be held in spite of the ban. The hope of the planners was to get thousands of people to protest.

Brussels mayor denied the Stop the Islamisation of Europe group last month for the demonstration today, that it threatened civil order and cause problems between immigrant and majority populations.

EU officials announced their positions on Monday, according to which in the name of freedom of expression, the demonstration against Islmaization should be allowed. EU justice and interior commissioner, Franco Frattini, admitted that he didn’t want to get involved in internal matters, but that his personal opinion that the demonstration should have been allowed.

Note: According to the Tundra Tabloids’ own sources, this display of police force was solely for the “slap down” of the Vlams Belang members present. There was never going to be any rioting or violence by the protestors. Shame on the EU and Brussels mayor.

Update: Brussels Journal video of demonstration (via GOV) viewable here. A real brutal display of force by the Belgian police. A real disgrace.