Thanks to the Tundra Tabloids’ good friend Sol, at Solomonia, for the “heads up” on the recent CAMERA report. 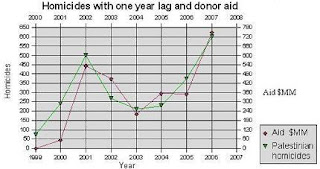 “These statistics do not mean that foreign aid causes violence; but they do raise questions about the effectiveness of using foreign donations to promote moderation and combat terrorism. The graphs reveal that the increased budgetary aid to the Palestinian government after the start of the second Intifada in September 2000 was accompanied by a corresponding increase in the number of Palestinian homicides in 2001 and 2002. After mid-2002, Israeli countermeasures against suicide bombers began to reduce the number of Israeli dead.

By August 2003, the first portion of the security barrier was in place, leading to a rapid decline in homicides in 2003. The appointment of Salam Fayyad, a moderate technocrat, to the finance ministry in late 2002 also resulted in reduced aid as Israeli tax revenue was restored to the Palestinian government. While Israeli countermeasures reduced the number of Israeli victims, Palestinian factional violence took an ever increasing toll. When including Palestinian victims of Palestinian violence as well as Israeli victims, the correlation between aid and homicides continues beyond 2003…

…Infusions of foreign funds into the PA budget from late 2000 through 2002 correlated with increased violence. Only when Israel enforced a near total separation from the Palestinians in 2003-2004 did the level of terrorist killing decline significantly. But this was soon followed by increasing factional violence, which is consistent with the fact that money was still being made available to purchase weapons and pay the salaries of the expanding militias…

The following UNOCHA graph below, clearly shows the reduction in the level of Palestinian terrorist suicide/homicide bombings directed against Israel, since the building of the security fence in 2003. The results have vindicated its construction, regardless of the biased decision from the Hague.

Clearly the security fence Israel has built pretty much along the “Green Line” (line of cease fire), has been effective in stopping Palestinian terrorists from murdering Israeli citizens in cold blood. Palestinian snipers are no longer able to terrorize Israeli highways, like the one near Qalqilya, (pro-Palestinian advocates and their supporters in the media always show the tower and concrete wall, but never the highway that rolls by on the Israeli side) where people driving in their cars became moving targets for sport. *L* KGS

Note: Here is more info on how deadly Palestinian homicide/suicide terrorist attacks can be. Each Palestinian bombing attack that succeeded, managed to murder on an average, 3.6 Israelis (2004). When factoring in the Israeli security forces success in stopping Palestinian terror attacks in 2005, the number of Israeli lives saved from being murdered by Fattah’s Tanzim and Hamas alone, were 273 people.

Also worth noting, is that the supposed “moderate” Tanzim (Fattah’s terror org) was more actively involved in terrorist suicide/homicide bombing attempts than “hardline” Hamas. But Hamas lead in the overall number of terrorist attacks by far.

It is therefore a matter of fact that, Fattah is as hardline as Hamas concerning its desire to murder Jews, and that if every terrorist attack (meant to murder as many Jews as possible) carried out against Israel had succeeded, Israeli deaths would outnumber that of the Palestinians.